Zuckerberg: "the government blew it" with NSA scandal 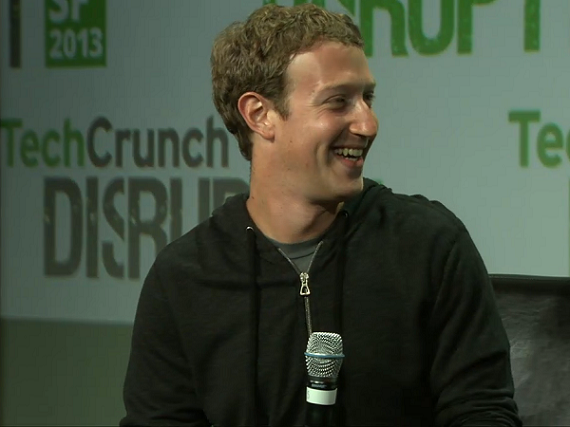 It was exactly one year ago today that Mark Zuckberg took the stage at Tech Crunch Disrupt for his first interview since the company's IPO to declare that Facebook was now to be "mobile company." That statement turned out to be an important turning point for the company.

Zuckberg took the stage again on Wednesday, this time offering his thoughts on a wide range of topics, including what he thinks Twitter should know before going public, if Facebook Home has been a failure and what he thinks about the NSA scandal.

One of the first questions that Zuckerberg was asked was, as an IPO veteran, what advice he would have for Twitter as they get ready to go public as well.

"I'm kind of the person you'd want to ask last about how to make a smooth IPO," Zuckerberg joked.

Getting more serious about it, he called Facebook's first year as a public company "extremely turbulent" but also said going public was a "valuable process" that helped him get to know his company much better than he did before.

"I actually think its made our company a lot stronger, because the process of leading up to going public, you have to know everything about your company. And kind of inside out, have everything instrumented."

That not to say that he wasn't worried over what the affects of the company's bumpy first year might be on the company and its employees.

"I was extremely worried that people would leave the company and people would get really demoralized when the stock price was down, but people were really focused on the mission and really believed in the products they were working on and we haven't seen a lot of that."

So what should Twitter take from that? If you are successful, keep doing what you've been doing and don't try to change it to go public.

"I think as long as Twitter, and this goes for all of these private companies that are thinking about when they want to go public, is that as long as they focus on what they are doing then I think it's wonderful."

Later on in the interview, modertor Michael Arrington asked Zuckerberg about Home, the Android user interface that was introduced in April: "Would you consider Home, so far, a failure?"

Home debuted to mixed reviews from users, who were slow to adopt it. While Zuckerberg acknowledged that the UI was "rolling out slower than I would have hoped," he was not giving up on it just yet.

"One of the toughest things is determining when something isn't going to work versus it just hasn't worked yet," he said. And people do love some of the features, including coverfeed and chat heads.

"I still fully believe that this is going to be something that a lot of people want over time," Zuckerberg said."Getting content delivered to your homescreen, and being ambiently aware of what's going on, is a very valuable thing."

Facebook has been deliberately slow with the rollout as well.

The first version was released as a separate app on purpose, he said, but "over time, once we get it to a place where we're really happy with the product, we'll just prompt people on the Facebook app, 'turn this on and you won't have to go download a separate app.' You'll be able to have the lockscreen as part of the main app.

And that developement "is not super far off," he said.

As you might imagine, Zuckerberg had plenty to say about the recent NSA scandal which has prompted the company to file a suite in the secret Foreign Intelligence Surveillance Court to ask the government for permission to reveal information about the number and types of national security requests for user data that it receives.

"We take our role really seriously. I think it's my job to protect everyone who uses Facebook, and all the information that they share with us. It's our government's job to protect all of us and also to protect our freedoms and protect the economy and companies. And I think they did a bad job of balancing those things," he said.

"Frankly, I think that the government blew it."

After the scandal broke, and the government tried to calm people down by saying that they weren't spying on Americans, that was "really bad" for any company that was trying to serve people around the world.

Facebook has been pushing for more transparency, as the government has been really unhelpful in making it clear that there they are not asking for a huge amount of data.

"We worked with government to get it to the point where could release number of aggregate requests," he said. Facebook released its first ever transparency report earlier this month.

"The reality is that, because of the transparency that we pushed for, now people can know, and I think they deserve to know, that the number of requests that the government is making is closer to 1,000, and its definitely not 10 million or 100 million."