Account, which was timed with the launch of LADEE on Friday, already has over 46,000 followers 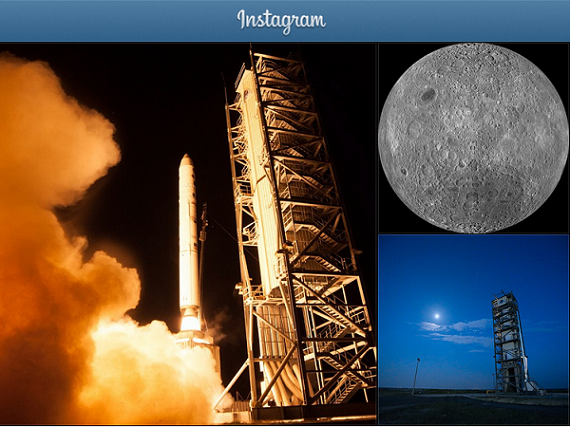 Space, the final frontier. Ever since we basically stopped having places to discover on Earth, we've started looking up for new worlds to explore. Unfortunately, despite what Newt Gingrich might tell you, most of us will never have the chance to visit the moon.

So NASA is giving people the next best thing: beautiful images, taken from space, and put up on its brand new Instagram account, which was unveiled Friday.

The creation of the account was meant to coincide with the launch of the Lunar Atmosphere and Dust Environment Explorer (LADEE), which took off on Friday night. NASA posted images of the moon and real-time photos from the launch complex before, and during, Friday's scheduled liftoff.

LADEE is a robotic research mission that will orbit the moon to gather detailed information about the structure and composition of the thin lunar atmosphere and determine whether dust is being lofted into the lunar sky.

NASA will also be posting real-time pictures from LADEE while it is in space as well.

"We'll be sharing images that look at everything NASA is doing. Followers should look for images from NASA's programs and people including crowd-favorites like the Hubble Space Telescope, the International Space Station, satellites that are studying the Earth, historical imagery, and so much more. The universe is our only limit," Jason Townsend, Deputy Social Media Manager at NASA, told VatorNews.

"We want to tell the LADEE story on Instagram through images. So, if we get engaging photos, we'll surely post them. We also plan to post images on an ongoing, daily basis — some in real-time as events dictate. We want to highlight many parts of NASA to showcase the incredible work being done to understand our place in space."

In addition NASA will be taking advantage of Instagram's video feature, which debuted this past June and allows users take 15 second videos, said Townsend.

So far the NASA Instagram has only posted seven pictures in total, but the account already has 46,180 followers, and growing quickly.

NASA's Twitter account, it was noted, has nearly five million followers, which is more than any other federal agency.

Seeing images from space can be very powerful for a lot of people, and I think it could lead to a renewed interest in space from a public that doesn't seem to have as much interest in the topic as it had in the past.