Albums can be shared with up to 50 people, who can contribute 200 photos each 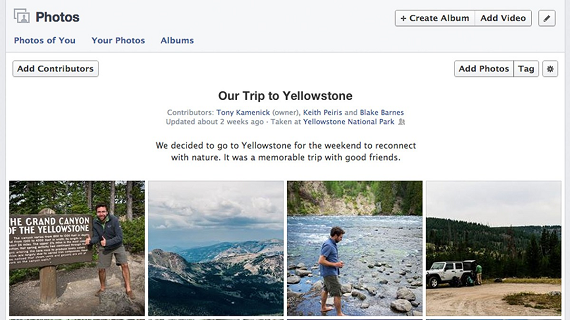 When I was in college I took this really cool trip abroad called the European Odyssey, where two professors, and around 10 students, drove in a van all over Europe, visiting 13 countries. When we got back, all of us did the same thing: uploaded the hundreds of photos we had taken onto Facebook. And it was basically a giant mess. Photos were repeated, then deleted when people inevitably decided to delete their accounts. To this day, there are photos that I know exist, yet I have no access to them.

Cut to 2013, and here we are. It took them all these years but it looks Facebook has finally gotten around to creating shared albums.

Facebook is set to launch a new feature, which will allows more than one user to upload images to the same album, it has been confirmed to VatorNews. Details of the feature were first reported by Mashable on Monday.

Here how it will work: the original creator of the album can invite up to 50 other people to contribute, and each one of them can share 200 photos. That it an additional 10,000 photos per album; a huge increase, considering that, until now, albums were limited to 1,000 photos each.

The creators of the album will also be able to delete or change photos, but contributors will have editing power over photos that they upload themselves.

The albums will also have three different privacy setting: public, friends of contributors and contributors only.

"Hundreds of millions of photos are uploaded onto Facebook each day and today, we're making it even easier for friends to share photos with the rollout of Shared Photo Albums.  Whether you're at a wedding, birthday party, or fresh off of a trip, all your friends will be able to add photos, tag photos and edit just one album," a Facebook spokesperson told VatorNews.

The idea for the feature actually came about during a company hackathon in January, Bob Baldwin, the software engineer at Facebook, told Mashable. It came, unsurprisingly, from user feedback.

Facebook is one of the best ways for people to share their pictures with each other, and adding a feature like this will no doubt help solidify the company's hold against numerous competitors in the space, including established companies like Flickr and Photobucket, as well as start ups like Tracks Media, WeHeartPics, and EyeEm.