Tweets will display, and link to, articles where that tweet has been embedded 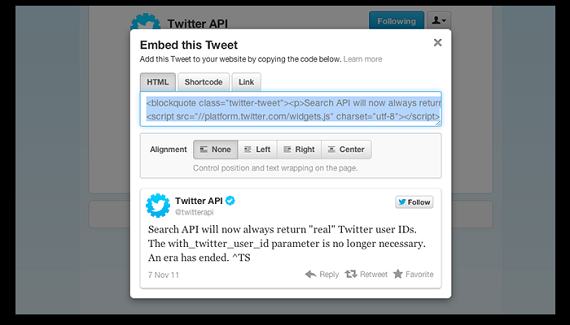 Maybe I'm just old school, but I still find it to be silly when tweets are treated as news. Because nothing could ever be more important than, say, Donald Trump writing some ridiculous nonsense about Obama's birth certificate. or Kanye West going on one of his infamous rants.

Best of all are Twitter fights, with articles that basically consist of a snapshot of back and forth tweets between celebrities sniping at each other. Like this one that recently broke out between Sean Hannity and Ryan Adams. Entertaining? Yes. Newsworthy? Not in my opinion.

But, like it or not, that is the state of the news right now and Twitter is, of course, the main benefitiary of this type of coverage. And the company plans on taking full advantage of it, giving journalists more incentive to embed their tweets.

The site has launched a new feature that will add a section called "Related headlines" on Tweets that have been embedded onto a particular website. The section can be viewed from the Tweet’s permalink page, and it lists, and then links, to the websites where the Tweet has beenembedded. This, Twitter, says will make it "easier to discover stories that provide more context."

The example that Twitter gives is the news that NBA player Jason Collins came out as gay.  Collins tweeted about his announcement, and the support he got for it. Websites such as ESPN, MSNBC and Bleacher Report then reported the news, and embedded Collins' tweets. Here is what it would have then looked like: 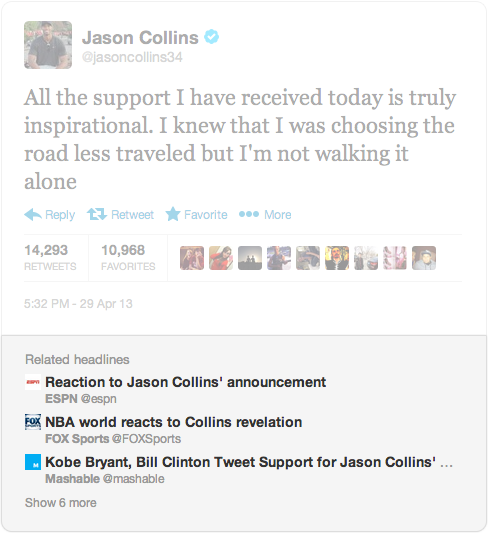 There are some questions regarding how this will work, though. First, will old tweets retroactively get a headlines section? Or will this only new tweets? Also, if a tweet has many citations, how will they be ranked? Will it be by who cited it first, or by followers, or by some other metric?

As a journalist, the second question means more to me than the first one. This feature is obviously an encouragement for journalists to embed more Tweets, making it a win-win for both sides; Twitter Incentivizes journalists to use their content by offering them more referral traffic by having their articles clearly displayed underneath said tweet.

But that only works if the news sources know for sure that they will be displayed. If only, lets say, five or 10 articles are prominently shown, and a user then has to click to find more, the incentive to promote that tweet will be greatly diminished.

A Twitter spokesperson would not share how the articles will be shown in the new "Related headlines" section.