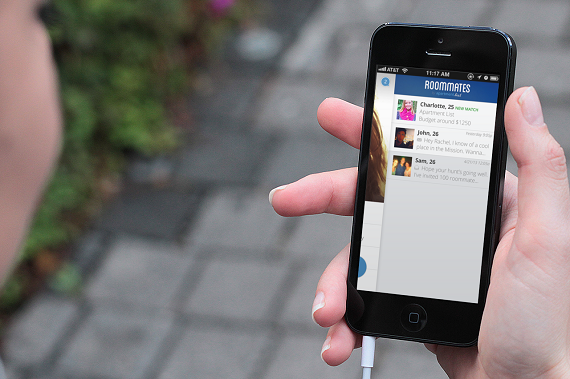 Aside for my time spent in college, I've never had a roommate. I lived at my parents house until I was 25, then I moved across the country and was able to find a place cheap enough to live on my own. And I feel pretty lucky about that, having gone through the process of trying to help my sister find a roommate multiple times, then seeing what she went through with them. There were lots of crazy people and lots of time spent trying to track people down for that month's rent. For me, I was glad to never have to deal with any of that.

But I realize that that simply is not an option for many people. Rent in big cities, like New York and San Francisco, is so unbelievably high that there just is absolutely no way for someone under 30 to live there alone. It's either find a roommate or live on the street. The choice is yours.

That is why apartment search engine, and former Vator Splash Winner, Apartment List is launching a new app to help its users find suitable roommates, the company announced on Thursday.

The new app, which is called, of course, Roommates, uses Facebook connect to help people find each other. By adding this social component, it is able to matches potential roommates based on similar interests, friends, age, likes, as well as neighborhood and budget preferences.

Users are able to anonymously decide whom they want to meet. The app then uses a double opt, meaning one when a mutual match is found the second person has to then agree for a connection to be made. The two roommate seekers are then be sent into a chat to get to know each other.

A person's Facebook profile can tell you where that person works, where they went to school, and how old they are. And from that information, you can tell if that person is the right match for you, Apartment List CEO and co-founder John Kobs told me in an interview.

The Facebook connect also allows potential roommates to see mutual friends, so that they can ask someone who also knows that person if they would be a good match.

"We want to paint a picture of who each person is," Kob said.

The app was originally launched in San Francisco, and it proved to be extremely popular, gaining 2,800 downloads in just two weeks. The average profiles views 40 profiles every time they log on, Kob told me.

With the official launch of the app on Thursday, it is expanding to five new cities: New York, San Francisco, Los Angeles, Chicago and Boston.

Apartment List chose those five cities partially because those are cities where people who worked at the company had had tough experiences finding roommates themselves, but also because those are the cities that had the largest population rates and the lowest vacancy rates.

San Francisco, Kob told me, had a vacancy rate of 2.5% in the third quarter of last year. The vacancy rates for the most expensive U.S. cities average only 5.4%, according to the U.S. Census Bureau, decreasing slowly year to year and making roommates even more necessary.

These are also cities with enormously high average rents.

The ultimate goal of the app, said Kob, is to make finding a roommate a better experience, and making it so that people no longer have to rely on Craiglist.

"I want to disrupt the Craiglist roommates section," he said. "If you go there, you're not going to see pictures. You might send 50 e-mails and only hear back from one. People will not create a profile on Roommates unless they want a roommate."

Ultimately that will save time, and equate to a better experience to find better rental space in the U.S.

The idea for the app grew out of weekly mixers, held every Wednesday at 8 pm at the rec room at Apartment List headquarter in San Francisco. Two Apartment List employees ran the mixers: John Havel and Sam Parr, who Kob specifically cited as being the driving force behind them.

These mixers were a public forum, where anyone was allowed to show up, and they see 60 to 70 people showing up to find roommates. So, eventually, Apartment List decided that it should bring technology into the mix to help combine with offline experience.

You may be asking yourself, as I did, why Roommates is being launched as a separate app, and not simply incorporating it into the Apartment List experience.

The answer: it would be too much.

"Roommates is a very unique experience and it solves different issues than Apartment List," said Kob. "At a certain point don’t want to give our renters fatigue, and tacking on another standalone product onto Apartment List would not have been the best course of action."

Meanwhile, Apartment List is growing at a rapid clip.

The apartment search engine just had its biggest month ever, with 1.2 million rents. It now has 14.5 images per listing, higher than anyone else in industry. It has now grown to 40 employees, and last year saw 10 million in revenue. This year, the company is on pace to see $18 to $20 million in revenue.

The company, which was founded in 2008, raised $1 million in funding, but has otherwise been bootstrapped and never had to raise more capital. 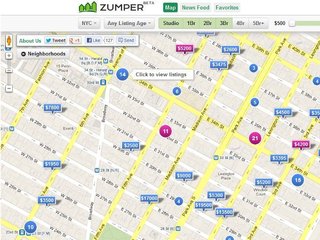 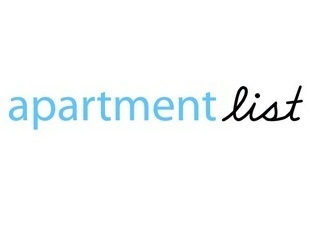