How to use Direct Public Offerings to raise funds 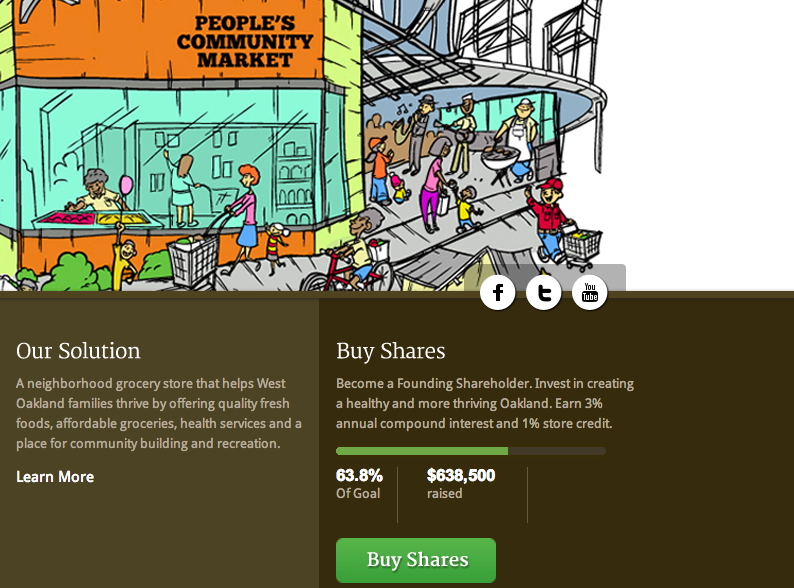 Thanks to the JOBS Act, which essentially provides a framework for equity-crowdfunding, there's a growing excitement among startups that an untapped base of potential capital will rain down like Manna from the sky. We're far from that point. Yet to be sure, there are a number of platforms emerging to be the conduit for that gift from the heavens.

Creating much of the awareness for crowdfunding possibilites are the donation-based sites, such as Kickstarter and Indiegogo. Just as online dating services became an accepted channel for singles to find their match, donation-based crowdfunding platforms have become commonplace for small companies or would-be entrepreneurs to pre-sell products.

Yet there are ways to get in on equity-based crowdfunding, using existing governing rules.

People's Community Market, based in Oakland, recently raised about $650,000 from 198 non-accredited investors for its West Oakland grocery store whose mission is to offer locals fresh groceries and reasonable prices. Founded by Brahm Ahmadi, PCM received an early-stage letter of interest from the California FreshWorks Fund for a projected loan amount of $2.4 million, based on a proposed equity level of $1.2 million.

When this news first landed in my inbox, I first thought - unaccredited and mass public promotion equals spam. I honestly thought it was a nuanced version of the Nigerian Prince scam emails. But I took a second look because I knew there were existing laws (e.g. used by Ben & Jerry's Ice Cream, raising $750,000 from 1800 ice-creaming loving fans) that allowed companies to raise funds from anyone. Indeed, PCM used what's called a Direct Public Offering (DPOs) that allowed them to raise money from hundreds of non-accredited investors, at as little as $1,000 apiece.

DPOs are similar to Initial Public Offerings, unlike private equity fundraisings that the JOBS Act is focused on. But unlike IPOs, DPOs do not require a middleman (or investment banker to execute the transaction), and allows companies to sell shares to anyone - customers, employees, friends, familey, etc. And some DPOs do not have to be filed with the federal government (which can lower admistrative costs).

In this circumstance, PCM filed for a California Department of Corporations permit title Section 25113. Ahmadi also relied on a federal exemption under Rule 147 of the 1933 Securities Act, that simply stated allowed them to be reviewed and governed by state laws.

Why go this route? I asked.

"We wanted to be a locally-and community-owned company. That goal doesn't fit with traditional forms of liquidity and investors," said Ahmadi. "We tried to raise provide capital, but it wasn't acceptable to most investors. They needed a liquidity event."

Indeed, there are many companies that spend months trying to secure venture financing to no avail. For those in that boat, a DPO is probably worth exploring. DPOs give you another avenue, especially if you have a community to tap into.

The upside of a DPO:

1) Investor pool is pretty broad - Using the federal Intrastate exemption, a company can tap as many as 2000 investors, of which 500 are un-accredited. This compares to a company raising a private round, which would cap unaccredited investors at 35.

2) Can raise $1M-plus - For equity-based crowdfunding under the JOBS Act, a company can raise up to $1M during a 12-month period. With a DPO, a company may raise more. According to Ahmadi, the limit is on a "per-permit" basis. "When you apply, you state the amount you propose to raise. We put down a minimum of $500,000 but there is no limit on how much you raise... If the state is concerned about the proposed figure, they'll propose a reduction. I know of some offerings that were permitted to raise up to $2 million."

3) Reasonable cost - "A little known secret about DPOs is that they can be quite cost effective," said Ahmadi. "The upfront cost to get the permit and set up the administrative system was worth the raise." On average it's about $25,000 per state for the legal work to set up with each state, said Ahmadi. Then for the set-up for each shareholder, the paperwork processing was minimal, said Ahmadi. The bigger cost will be putting together an annual shareholder document that keeps shareholders abreast of the company's financials and plans. Ahmadi pegs a rough estimate of this cost to be around $15,000 to $20,000 annually.

4) Customers become shareholders and evangelists - What better way to serve your customer by allowing him/her to share in the upside of the service they're helping to build? For PCM, one of the best marketing tools was having customer/shareholders hold dinner fundraisers. This helped PCM talk to more potential customers and shareholders.

5) Ability to promote -- PCM has a big "Buy Shares" button on its website. The company also sent me a non-solicited email. It's not a nationwide ad during the Super Bowl kind of general solicitation, but it's definitely pretty general. DPOs are allowed to be advertised in this way. "It's assumed that information will get out," said Ahmadi. Basically, regulators realize that it's futile to restrict access to the information because it will eventually reach a broader public.

But with the upside, comes the downside:

2) Potential limit to how much raised - According to Ahmadi, the limit is on a "per-permit" basis, which is then approved by the state.

3) Restricted to certain states - PCM restricted its offering to California. While companies can offer DPOs in other states, it's an additional cost to get approval from that state.

4) Unable to raise money from VCs down the road - PCM plans on raising $1 million through its DPO. While that may sound like a lot, it's not often enough for many companies to grow. PCM expects to get a $2 million loan, once it raises this round. For any other company that plans on raiisng a DPO, it's worth noting that follow-on capital may be hard to raise from traditional venture capitalists as they will likely look askance at a capitalization table with hundreds of shareholders.

But a DPO didn't stop Ben & Jerry's from raising fresh capital by eventually doing an IPO. And if your plans are to be locally-owned and locally-focused, like PCM, it's a fundraising option that should be considered.