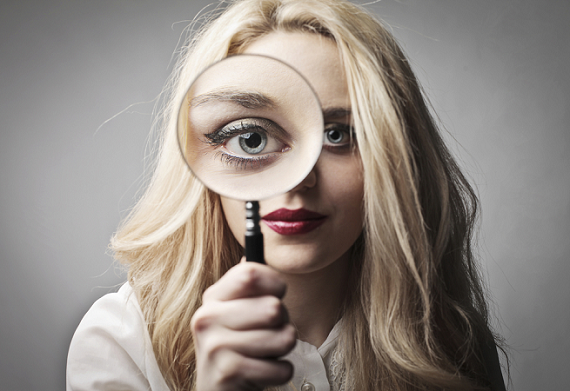 When I use Google, its mostly for quick searches, like if I want to find out how old a celebrity is or if I need a new chicken recipe. And it usually doesn't take me long to get the information I need before I move on to something else.

But what happens when I want to really get to know more about a given subject? Then Google can help lead me in the right place, but I wouldn't really know which articles would actually serve that purpose. Without any guidance, it can seem like an endless slog until you find what you were looking for.

Thankfully, Google will start taking care of that for me by adding a new feature that will highlight three in depth articles that explore my search topic, the company announced in a blog post Tuesday.

"To understand a broad topic, sometimes you need more than a quick answer. Our researchindicates perhaps 10% of people’s daily information needs fit this category -- topics like stem cell research, happiness, and love, to name just a few," Pandu Nayak, Member of Technical Staff at Google, wrote.

"That's why over the next few days we’ll be rolling out a new feature to help you find relevant in-depth articles in the main Google Search results."

For example, if a user searched for "censorship" they would see the following three articles: one by Salman Rushdie in The New Yorker, a piece by Eric Schmidt and Jared Cohen in the Guardian, and another article about Iran. 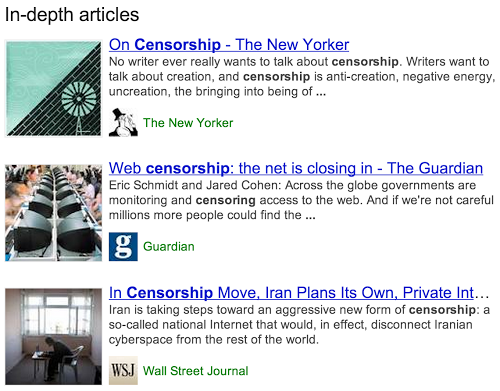 A search for Lego would point a user to articles about gender to engineering or art. Other potential topics that Google points to include population growth, capital punishment and e-waste.

This sounds like a good idea, and in some ways it is. Maybe people haven't though about some angle on a given topic; I'll be honest and tell you that I never knew that there was an issue with gender when it came to legos, so there you go.

But there are also some very obvious problems here.

First of all, three articles cannot do every topic justice. For something like legos, that would probably not make much of a difference. But what about loaded topics, like capital punishment or abortion? Some things simply cannot be boiled down to a mere three articles. Perhaps Google should make those first three articles a sampling of a larger section from which to choose.

There is also the issue of Google not explaining what it means by "in depth" or how it chooses these specific articles. In the above example for censorship, there was an article included from Eric Schmidt, Google's former CEO.

It seems obvious that Scmidt would be featured because of his close connection to Google. But if the company consistanly does highlights people and pubications that it has close relationships with, it could face some trouble.

Google has already been probed by the Federal Trade Commission over antitrust violations when it cames to its search algorithms.

The FTC specifically focused on the introduction of “Universal Search," which prominently displays targeted Google properties in response to specific searches, to determine if  Google used it to eliminate competition.

Google was also accused of altering its search algorithms "to demote certain vertical websites in an effort to reduce or eliminate a nascent competitive threat."

The FTC and Google reached a settlement in January, in which Google agreed to give online advertisers "more flexibility to simultaneously manage ad campaigns on Google’s AdWords platform and on rival ad platforms."