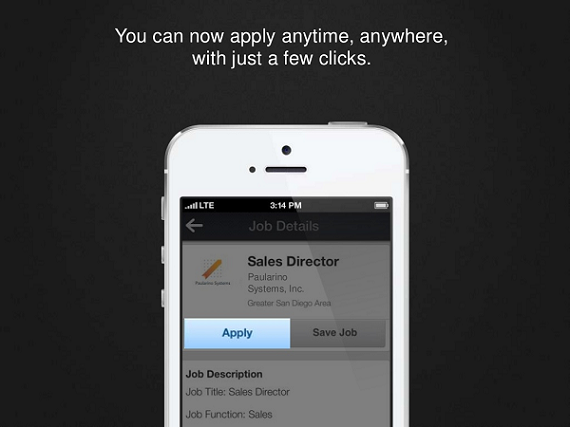 Back when I lived in New York, I remember the job market being so competative that it was almost a joke. I would basically sit around all day refreshing Craigslist, hoping that one of the jobs I applied to would actually get back to me. Looking for work was essentially a full time job itself.

That also meant, of course, that if I went out and did anything that that was a day that would have wound up being wasted. Now, with the rise of mobile, that would not be a problem.

LinkedIn introduced a new feature Monday that will allow its members to apply for jobs directly from their iOS or Android device.

More than 30% of the company's members who view jobs on the network are now doing so from mobile, Vaibhav Goel, Associate Product Manager at LinkedIn, wrote in a blog post. And being able to apply directly from the mobile app was one of the most requested features from LinkedIn users.

"We have heard from many of you that you want the ability to apply directly from your mobile device but that managing and editing resumes on a small screen can be challenging," said Goel.

"With that in mind, we’re introducing the ability to apply for jobs without a resume attachment from mobile. For many of the jobs that interest you on LinkedIn, you can now put your best foot forward by simply using your LinkedIn profile to apply for the job."

For users to access jobs listing on mobile, all they have to do is his the  “Apply” now or “Save Job” for later buttons. If they hit apply, they will be able to review, and edit, their LinkedIn profile from the app before submitting, unless the listing has an “Apply on Company Website” button, which will mean that the company requires them to apply on their corporate career site instead.

After confirming their e-mail address and phone number, they just have to hit the “Submit” button and that's it.

The feature will begin to roll out globally today to our English speaking members Monday. To get it, users just have to update their iOS or Android apps.

This addition follows the network's update from last month, when it beefed up its mobile search capabilies to include jobs, companies and groups.

That means that, not only does it help its users apply for the job, but to have the most up to date information for their interview.

For example, the app can be used to look up a person that they are about to meet with, as well as the company that tget are about to interview for. In addition, the app can also get up-to-the-minute professional intel, meaning LinkedIn members can make sure to get the latest competitive intelligence or timely news, which can help them be the most informed person at their next meeting. This includes industry news, access advice from the top minds in business, or seeing who has joined a new company or received a promotion.

Check out this slideshow provided by LinkedIn about how the new feature works: