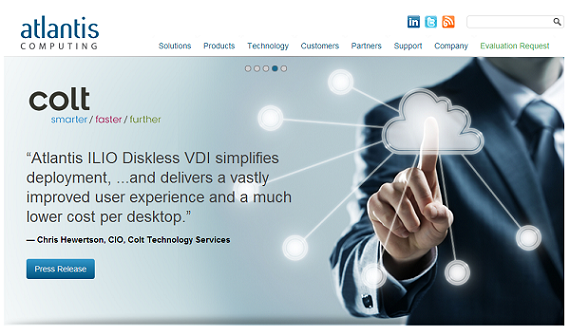 Virtual desktop storage provider Atlantis Computing has completed a $20 million Series D round of financing, it was announced Wednesday.

The round was led by new investor Adams Street Partners, with previous investors Cisco Systems, El Dorado Ventures and Partech International also participating in the new financing. With this round, the company has now raised a total of $35 million in funding.

The new money will be used to continue Atlantis Computing's expansion into new worldwide markets.

The company has been expanding to Europe and Canada over the last three years. Bernard Harguindeguy, President and CEO of Atlantis Computing, said in an interview with VatorNews, so now half of the company's business is in Europe.

Atlantis will be looking to expand to the Asian-Pacific region, as well as maturing in Europe and the Americas.

Founded in 2006, Mountain View, California-based Atlantis Computing specializes in data center storage optimization solutions. Desktop virtualization makes it easier for workers to be able to access their files and applications any time, anywhere and through any Internet-connected device.

The company seeks to optimize the use of data center storage by addressing key issues in the space, including performance, cost, disaster recovery, and the ability to scale-out on demand, said Harguindeguy.

It helps solve these problems with its Atlantis ILIO Persistent VDI 4.0 solution, which was released earlier this year. It enables Citrix XenDesktop and VMware View customers to deliver virtual desktops, while still using their existing images, tools and processes. The virtual desktops, Atlantis says, are both cheaper and faster than physical PCs.

Atlantis ILIO will be available soon for cloud-scale deployments of virtual servers such as databases, collaboration and mail servers.

In the past year, Atlantis Computing more than tripled its customer base, and it now has over 250 customers with more than 300,000 licenses sold.

The average customer purchases several thousand licenses, Harguindeguy said, and can range from 25 users to hundreds of thousands.

Atlantis sells lisences to industries across many verticals, including retail chains, manufacturing, and construction. The company also has a big presence in health care, being used in hospitals, agencies an even by Blue Cross Blue Shield.

The company's philosophy is to help the customer succeed with their projects.

"We want to enhance what they do, and bring more value to them," said Harguindeguy. "We make sure that their deployment was successful."

The company sells a license per user, and also sells servers, the size of which will depend on the need of the customer.

Atlantis Computing was the winner of both the Best of VMworld and Best of Citrix Synergy awards. In addition to its Mountain View headquarters, it also has an office in London, as well as teams in both Amsterdam and Munich.