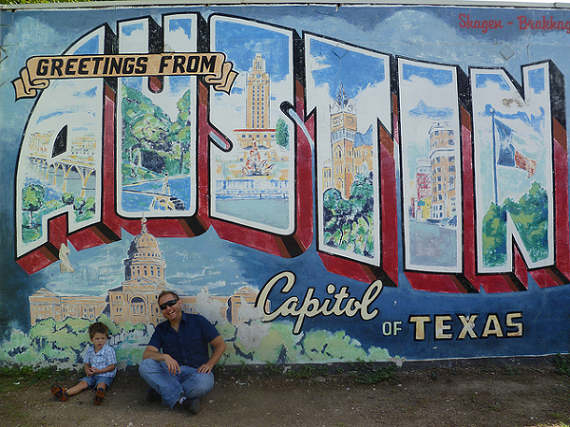 It's official! Google has chosen the second location for its Google Fiber high-speed Internet and television service: Austin, Texas.

Google said that it hopes to be able to connect homes in Austin, Texas to the service by 2014, in an announcement in a blogpost from Milo Medin, Vice President of Google Fiber, Tuesday. It will be the first location to get access to the network outside of the initial rollout in Kansas City in November.

Medin called Austin " a mecca for creativity and entrepreneurialism, with thriving artistic and tech communities, as well as the University of Texas and its new medical research hospital," and said that Google was "sure these folks will do amazing things with gigabit access."

Customers in Austi will get the same products as those Kansas City, he said: Gigabit Internet or Gigabit Internet plus Google's Fiber TV service with nearly 200 HD TV channels. Though details on prices are still being worked out, Medin said that they will most likely be similar to those in Kansas City as well.

Also, like in Kanasas City, Austin residents will be given free Internet connection at 5Mbps for seven years, as long as they they pay a one-time construction fee.

Google also said that it is " planning to connect many public institutions as we build in Austin— schools, hospitals, community centers, etc. — at a gigabit for no charge."

"The Internet is still in its early days and has so much more potential to improve our lives. The web helps students and families access essential resources, from information about jobs and healthcare to banking and educational services. Communities that are connected to the Internet grow stronger because there’s greater potential to create jobs, drive economic growth, and help businesses succeed" Medin wrote.

:We believe the Internet’s next chapter will be built on gigabit speeds, and we hope this new Google Fiber city will inspire communities across America to think about what ultrafast connectivity could mean for them."

Unfortunately for Google, it is not the only company attempting to bring high speed Internet to Austin. In fact, on the very same day that Google officially declared its intention to expand to the new city, AT&T also announced that it intends to build a 1 gigabit fiber network in Austin.

The company said that it anticipates being granted "the same terms and conditions as Google on issues such as geographic scope of offerings, rights of way, permitting, state licenses and any investment incentives."

“Most encouraging is the recognition by government officials that policies which eliminate unnecessary regulation, lower costs and speed infrastructure deployment, can be a meaningful catalyst to additional investment in advanced networks which drives employment and economic growth,” Randall Stephenson, AT&T chairman and CEO, said in a statement.

The timing of the AT&T announcement is surely not a coincidence, but there is nothing wrong with a little healthy competition. Ultimately the ones who will benefit will be the residents of Austin.

Google put together this short video about rolling out Fiber in Austin: