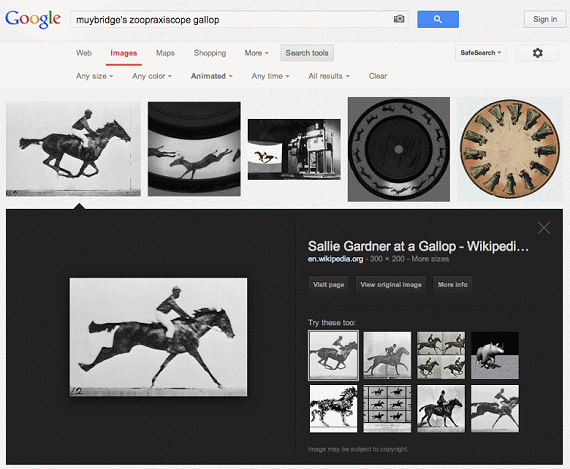 Sometimes there really is nothing better than a great GIF. If you're watching a television show, and a character makes a hilarious face, you just know that someone is going to put it an animation of it the next day. The only problem is finding it. Locating a GIF can be a long process, cycling through endless images, not knowing if any them are actually animated. Its enough of a pain that most people don't even bother to look.

Now Google is finally getting around to solving that problem by making it so that users can use Image Search to find their favorite GIFs, it was announced via Google+ on Tuesday.

All a user has to do is click on “Search tools” below the search box, then select “Animated” under the “Any type” dropdown box, and all of the results will be GIFs. Google has also added a new "transparent" filter under the “Any color” dropdown box so that users can find animations that do not have a background.

So the next time you want to see that GIF of Grumpy Cat doing... whatever it is that Grumpy Cat does, your life just got a lot easier!

As Google pointed out in its post Tuesday, GIFs are nothing new. In fact, they stretch all the way back to the late 19th century.

"Even if you’re a fan of animated gifs—say you were the first to email your friends the slow loris very slowly eating a rice ball (goo.gl/KDDX1)—you may not know that the origins of animation go as far back as 1879 and Eadweard Muybridge’s “zoopraxiscope” (see our doodle homage to Muybridge:goo.gl/PGQW3)," wrote Google.

"Gifs have been around since 1987 and have become the de facto standard for short animations on the web, from pony glitter text (goo.gl/iZoEZ) to grumpy cat memes (goo.gl/bC9um)."

In honor of Google finally catch up to the rest of the Internet, here are some of the best GIFS I could find:

Here is poor Jennifer Lawrence tripping on her way to the Oscars last month:

Carlton from The Fresh Prince of Bel Air dancing around:

A guy on a sled nearly causing a major accident:

And there is, of course, good old Grumpy Cat: