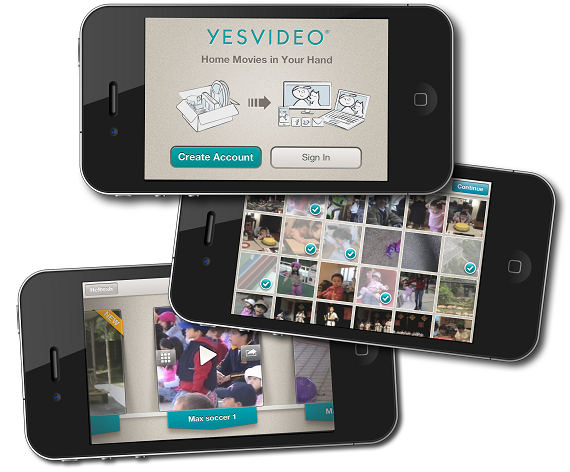 Home movies can be really fun to watch... or they can be a total nightmare. Having recently spent Christmas with my girlfriend and her family watching some of their old home movies, I can tell you: people enjoy watching their two or three year old selves playing and being cute. Videos of the same person at 13 or 14... well that results in quite a different reaction.

So beware, because those home movies taken when you were at your most awkward stages might be coming to a mobile device near you!

YesVideo, a service that digitizes home movies and uploads them to the cloud, is launching an iOS app that will allow users to watch those videos anywhere, it was announced Thursday.

Customers will have the ability to view the videos on their iOS device, or connect it to an Apple TVC or HDTV via AirPlay to stream them directly onto a television set. The app is currently only available on iOS, but an Android app is expected to be released by the third quarter of this year.

"This is a huge deal," Michael Chang, CEO of YesVideo, said to me in an interview. "This allows customers to access their memories anytime."

The experience of a family sitting around a television, watching tapes or film of home movies has gone away the last few years, he said. With the YesVideo app, he hopes to bring that experience back by allowing the videos to be viewed wherever the family is at that moment.

"We want to unlock these video memories," Chang said.

The service can digitize 50 different formats, including 8mm, 16mm, VHS, Beta and MiniDV.

Two years ago, YesVideo began uploading those videos to the cloud, allowing users to access them online and watch them on the Web. Now those videos will be available on mobile as well.

YesVideo fills a big hole in the market, Chang said, as there are an estimated 1.5 billion video units sitting in the closets and drawers of 90 million U.S. households. The company currently digitizes 5,000 units of video every single day.

By going to mobile, Chang said that he believes that viewing and sharing of videos could go up to 10 times from its current levels, and the company could see up to four times the volume of video that it sees right now. By the end of the year YesVideo expects to have half a million accounts and is currently on track to make $55 million in revenue.

While relying on retail stores for digitizing might seem like an old fashioned way to do business, Chang insists that the company will never cut out the retail component.

"They are the face of YesVideo," he said, "and they make customers comfortable." Indeed, only 2% of YesVideo's customers choose the mail-in service over taking the videos to a retail location.

In fact, Chang says that the company is actually going to be doubling down on retailers, and continue to grow the number of partners.

One thing that YesVideo does plan to do, though, is to allow customers to take their own videos on the app and upload them directly to the cloud, so that they can have a complete library of videos both old and new, on YesVideo. Eventually, it may also get into e-commerce as well, allowing customers to gift video highlights to friends and family.

The ultimate goal of YesVideo, Chang says, is to compete with Amazon and Google, both of which allow photo and video sharing attached to the cloud.

YesVideo is already the dominant provide of the transfer side of the business, said Chang. Now it wants become a dominant player in the video cloud streaming market as well.

YesVideo is based in Santa Clara, California and also has a division in Atlanta to handle digitizing on the east coast. The company has raised $26 million from Kodak, LSI Logic and ROVI.  Last summer when Michael Chang and Andy Choi joined, they also invested in the company.

A special discount for our readers

In honor of Valentine's Day, YesVideo has decided to offer Vator readers a 30% discount for their video transfer!

To get your discount just head over to  direct.yesvideo.com.  Get your order ready and then enter this special code in the coupon field: VATOR

You can send in your old home movies in any box, or you can request an EasyShip Kit from YesVideo.

Check out the video below to see how YesVideo works:

YesVideo is the global leader in digitizing and sharing vintage video memories. The company’s patented technology efficiently transfer personal videos at scale. Customers can then view, edit and share their personal video in the cloud. YesVideo has unlocked billions of classic family video moments and life events for over 7 million customers. Customers can drop off their personal film, tape, prints and photo albums at one of YesVideo’s 34,000 retail partner locations, or online at YesVideo.com.