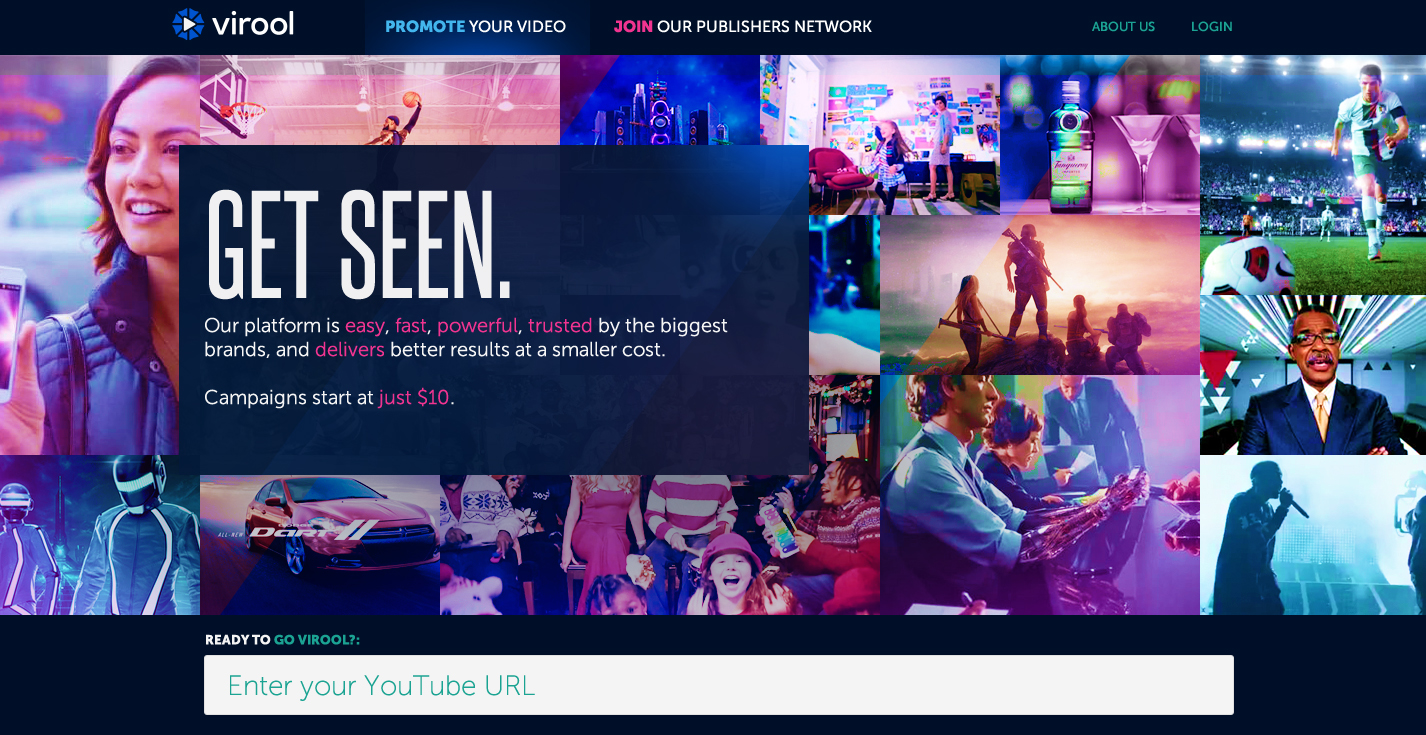 If you ever wanted to get your video viral (or at least have a better chance of going viral), you now can do that by spending as little $10 a month.

By participating in YC, the two founders, Alex Debelov, who is CEO, and Vlad Gurgov, CTO, received around $25,000, tons of support and mentorship, in exchange for 7% of their company. Plus the company took the option to receive $150,000 in the form of a convertible note from Start Fund (joint venture between Yuri Milner and SV Angel), SV Angel, General Catalyist and Andreessen Horowitz.

Virool is positioning itself to be a Google AdSense for video, said Debelov, in an interview with VatorNews.

Advertisers pay Virool on a per-click basis anywhere from 4 cents per view to 25 cents. Much like AdSense, advertisers bid against each other for certain clicks. But rather than bid on keywords, they bid on a target market by choosing region, age, interests, and gender. Virool then finds those viewers across its publishing platform, which consists of blogs, Facebook games and mobile apps. Virool sits in between the publisher and advertiser and takes a cut.

"We help you expose your content in front of [your target market]," Debelov explained. "If they [the viewers] lie it, we have easy solutions for them to share it. But we can't guarantee that they will."

Indeed, Virool can only do so much. The content has to be worth sharing. But at the least, Virool can help aggregate the kind of audience an advertiser is looking for. And, if one target type doesn't respond, an advertiser can choose to target another market and analyze how the video is being received across different target markets.

Want to try it out for yourself? Virool is offering a Valentine's Day $50 credit. Just use "valentines2013" to get that credit.

To date, Virool has 30,000 advertisers, large and small. Some customers pay $10 a month, others such as Intel, have paid about $300,000 in a month, said Debelov. Other large customers include Orbitz, Samsung, K-Swiss and Sony. The company has close to 2,000 publishers, Debelov said. A

Since these videos are advertisements, publishers will often put them in front of exclusive and popular content. Advertisers only pay if someone watches the content for 30 seconds or longer.

Asked how Virool is different from Unruly, another well-funded social video advertising platform, and Debelov said this: Unruly costs about $100,000 and it's not fully self serve. With Virool, it’s $10 to start a campaign and you can change whatever you like and you’ll see all the analytics and have it running in less than five minutes.

Interestingly enough, Virool's founders didn't just wake up and say they wanted to create a self-serve social video platform. They started, as most companies do, with a different objective.

"We started as a consulting company," said Debelov. When the company launched in August 2011, it was just he and his partner working with large advertisers. Eventually, they were being asked if they could distribute videos for budges in the $10 to $100 range. With that itnerest, the duo started working on a self-serve platform at the end of 2011 and it was launched in March 2012.

The platform was a hit as users started putting in orders for $10 to $100 to get views on their videos. At that point, Debelov started looking for funding, and initially caught the attention of Paul Buchheit, a partner at Y-Combinator. Buchheit invested personally, as well as Loopt co-founder Sam Altman, Dave McClure (angel and founder of 500 Startups), Farzad Nazem (former Yahoo CTO), Erik Moore (early Zappos investor), Garry Tan (co-founder of Posterous), and Mike Collett (Promus Ventuers Founder).

Watch this video to get a sense of Virool.

There are over a million videos being uploaded to YouTube every day and 95% of them get less than 1,000 views. No matter how funny, appealing or viral your video is, it’s not going to go viral unless enough people discover that video and begin sharing it. That’s where Virool comes in.

Virool helps anyone with a video to get noticed.

Virool is a self-serve platform that distributes videos over 30 seconds long across its network of Facebook apps, mobile games and blogs.