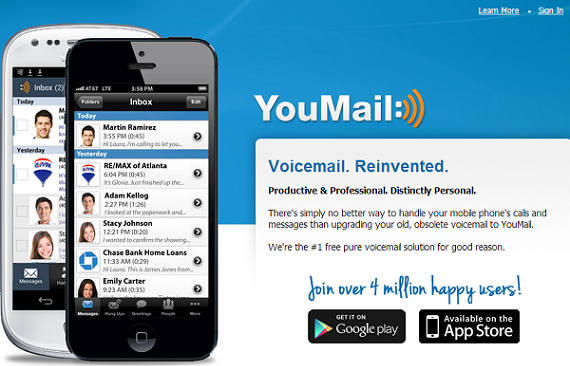 In an effort to become the premium voicemail service in the enterprise space, YouMail has debuted the Business Edition of its popular app.

The new Business Edition will be offered to employers for $6.99 a month per user, but is launching with a price of $4.99 a month, the company announced Wedneday

It contains exclusive features that the regular YouMail service does not include, such as:

The reason that YouMail decided to launch a business edition of its app is simple: it is because these were not features that the regular YouMail user would need, YouMail CEO Alex Quilici said in an interview.

The business model for the product is based on Dropbox, Quilici said, in that it is a service for the consumer that has been brought into the workplace. Once employees of a company like the service, YouMail can employ the Yammer model, and work directly with management to bring them a good rate on bringing the service to the entire workforce.

Founded in 2007, Irvine, California-based YouMail is a mobile voicemail app that seeks to make the experience better for the caller with features that include personal greetings, which address the caller by name; and automatic texts that explain why the person did not answer the call.

On the receiver side, it allows users to block people in a feature called "Ditchmail." Users can even submit which numbers are from telemarketers, so the service will block that number from calling any of its other users in the future.

Focusing on the caller side of the experience is that separates YouMail for any other voicemail service, says Quilici, including Google Voice, though its biggest competitor is "inertia," or the resistance to change. The way that YouMail has gotten people to adopt it is by word of mouth; the company has done no marketing. It simply offered a better product than the standard voicemail that came with mobile devices.

The philosophy of the company is to answer every call that a company misses, Quilici said, and to make it more comfortable for users to not have to always answer the phone.

The company has raised $13 million, and has been funded by Vantage Point Capital Partners, the Crunch Fund, Siemer ventures, and the Tech Coast Angels.