Pinterest to keep prying eyes aways from your pins

Secret boards feature launched just in time for the holidays 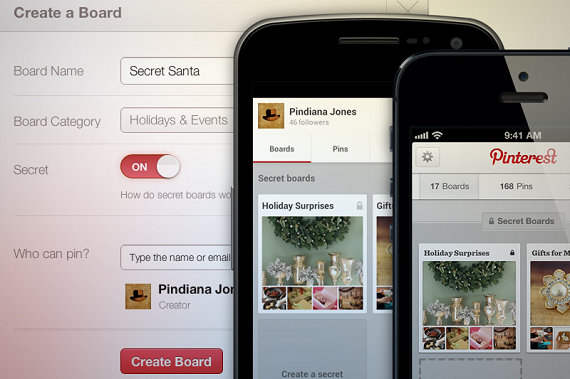 Social media has made the Internet a more open place. And, that is often a good thing. It makes articles and videos easier to share, and allows people to reconnect who may never have been able to otherwise. But then there is the dark side of that openness. What about things we want to keep private, for whatever reason?

Click the wrong button and everyone can see the article you just read, or the YouTube video you just watched, even if you didn’t want them to. And then you can only hope it wasn't something too embarrassing for your mother to see. Peruse someone's profile on LinkedIn and that person gets an alert about your recent visit.

So, in the spirit of secrecy, Pinterest began rolling out a test of secret boards Thursday, in order to stop other people from knowing what you’re into on the social network.

In a way, the secret boards act kind of like a Facebook post that is set so only certain people can see it. The user can either keep the secret boards to themselves, or share them with other users that they invite, but no one else will be able to see them. Users can have up to three secret boards.

Pinterest says that existing boards cannot be made secret because, of course, a bunch of other people have already repinned from it, so you can’t suddenly stop them from seeing it.

The reason that the social network says that it has made the secret boards available now is because of the upcoming holiday season, so people can pin gifts they want to buy without having those people know about. We all know, though, that there are countless reasons that someone may want to hide whatever he or she is doing, both good and bad. Pinterest can get a little racy sometimes, so its not very surprisingly that being able to pin in secret was something that Pinterest says was one of their most frequently requested features.

“We hope that secret boards will make Pinterest even more useful. You can use secret boards to keep track of holiday gifts, plan a special event, or work on a project you aren’t yet ready to share with the rest of the world,” Evrhet Milam, software engineer at Pinterest, wrote.

The feature is being tested now, and here is no word on whether or not Pinterest intends to keep the secret boards around after the holiday season is over.

Creating a secret board is pretty simple. Go to you Pinterest profile, and scroll down to the bottom of the page and click Create a Secret Board. You can also do it by clicked Add+ at the top of the page, and then selecting Create Board to turn on the Secret Button.

The feature is also available on the mobile version of Pinterest, by tapping on the Boards tab, scrolling to the bottom and then clicking Create a Secret Board.