LA-based startup looks to be the builder of crowdfunding campaigns for brands, philanthropies 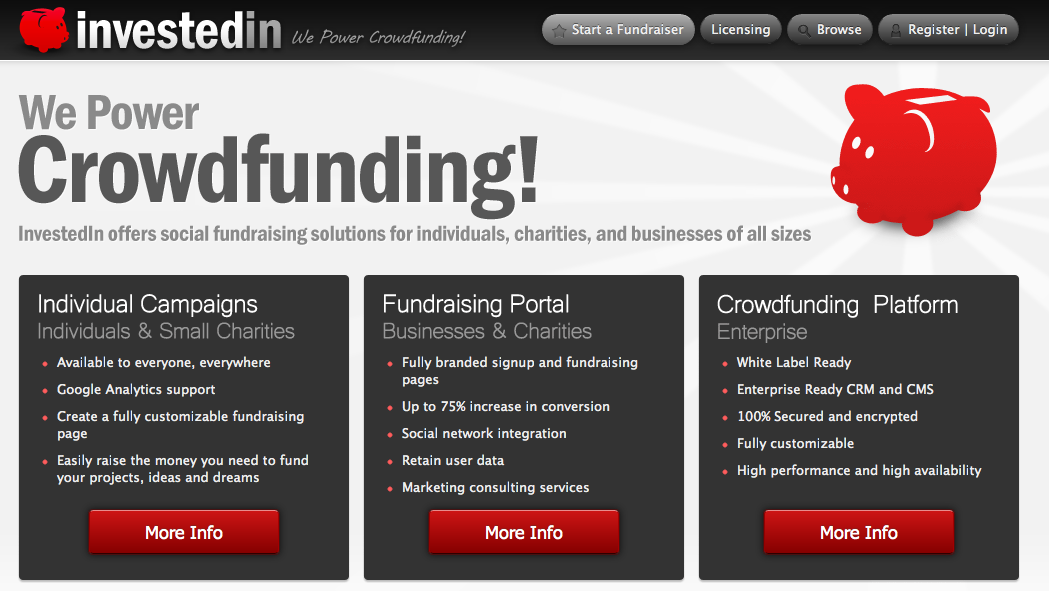 Crowdfunding is a hot market right now. Every other day it seems that a new crowdfunding portal appears. But when a company emerges that wants to do the backend plumbing so that everyone can have their own social fundraising platform, one might think that this space has reached a fever-pitched level.

Invested.in announced Thursday that it's raised $830,000 from a number of angel investors, including Kamran Pourzanjani, who founded PriceGrabber. Invested.in is a LA-based startup that wants to build crowdfunding platforms for large philanthropies or companies seeking to build their own social fundraising platform.

Invested.in started about three years ago by Alon Goren, who is now president, and Yadid Ramot, formerly a senior performance architect at MySpace and now CTO.

"This was a side gig," said Goren, in an interview. "But in the beginning of the year, we planned on doing this full time." The two then left earlier this year to work on the site full time and join the Amplify accelerator program.

So far, so good. By joining Amplify, Goren was able to meet a significant number of investors. "The five Amplify partners brought in 55 different investors to invest in Amplify. So just working there [at the Amplify offices], you build this huge Rolodex of investors," said Goren.

Invested.in currently has eight companies that it's building a crowdsourcing platform for. While Goren wouldn't disclose the names, he did mention one called Boostfunder, a crowdfunding platform started by Adam Draper, the son of well-known VC Tim Draper, which unfortunately never launched. Companies pay about $1,000 to $50,000 to have a crowdfunding platform built, said Goren. Since Invested.in is targeting many charities, the average package is closer to $1,000, he said.

While Invested.in wants to build social crowdsourcing platforms for any kind of company that would like to have such a service, the company is mainly focused on philanthropies for now. Around $250 billion was given to non-profits last year, said Goren. Yet, under 10% was done online.

Asked how Invested.in differentiates itself from other crowdsourcing platforms that target philanthropies and charities, such as Causes, Stayclassy, Crowdrise, and to some extent, Indiegogo and Kickstarter, Goren said that with Invested.in, organizations can have their own experience. On the other sites, campaigns can get mixed in with so many other options. "You're one of many non-profits on a site," said Goren, adding that Invested.in enables organizations to offer a more unique experience and one that stands alone from the many other crowdsourced campaigns.

Invested.in does sound a little like Ning, the company that wanted to provide social networking platforms for everyone. The idea was that millions of organzations would want their own social network. Ning was sold to Glam Media in 2011, for an undisclosed price. When I asked Goren if there were any lessons to be learned from Ning, he said that Ning focused too much on allowing people to self service themselves. To this end, organizations or companies using Ning found it just as easy or easier to have a Facebook page. Invested.in plans to focus more on higher-end projects.

"We're not interested in launching 1000 mediore sites," he said. "We'd rather have fewer high-quality sites."