Social media and the "information revolution" are good, but not without dangers 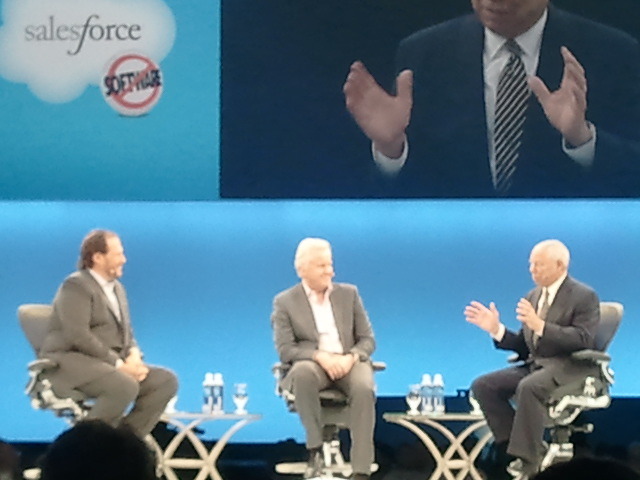 The topic of the day: leadership and social enterprising. The two men were asked by Benioff to share their thoughts and observations about the impact of the social sphere on the business world and how it affects leadership styles.

Given due where due is owed, Powell reminding the audience that the Internet was an innovation of the U.S. army and to be thankful for all that the little "improvements it brought to our daily life," such as "GPS."

Powell praised social media for the transparency and light that it brings to the darkest corners of the world.

"You can't stop it. Vladimir Putin can't stop it, and the Middle East leaders can't stop it. Social media is tied to youth and cannot be slowed down. It can help bring democracy," Powell said. "When in Tunisia a young street merchant sets himself on fire and it goes viral, the whole world sees it. Leaders have to adapt to it and shape up." But it comes with a warning, "With transparency of social media comes danger," he added.

The danger lurks in leaders fearing its wide reach and trying to stop it.

But the "information revolution cannot be stopped," he said. "The potential is there, but you have to have leaders who are comfortable with the technology and not terrified by it."

Benioff, switching gears to the economy, asked Immelt where he saw hope for the U.S. recovery.

"A government doesn’t create jobs," said Immelt. "I don't think anybody in the Job Council which I'm heading believe that. Entrepreneurs create jobs. Trade needs employees. Infrastructure creates jobs. Look at China. The recovery will be slow but 8% unemployment is not going to be the new norm."

On a somber note, Powell intercepted  "jobs that have disappeared in the trade industries aren't necessarily coming back," and speaking of  education, a theme close to his heart, "so we need to create new ones and educate children for jobs of the future."

Powell reminded us that neither Obama or Romney are "Superman." Immelt chimed in, "Businesses create jobs. Entrepreneurs need more support. Government can help with that."

When pressed on the role of business in solving environmental issues, Immelt said, "You mean like global warming and stuff like that? We came to the conclusion that global warming is real and that its full impact is hard to evaluate. We need to drive innovations and see how the entrepreneur’s spirit can solve problems like. I'm a big advocate for Price for Carbon. Look at China. It has installed more solar this year than anybody in the world."

Further adding, he said, "The Clean Tech Train is going to leave the station. We at General Electric invested $25 billion dollars on that stuff and a lot of it is going to be bought by China. I don't know if the U.S. government is going to be on that train but GE is." Recently, GE has been criticized for moving American-held jobs to China.

Concluding the chat, Benioff asked Powell what's his favorte technology gadget. "I like my E-ZPass. It's instanteneous and frictionless. That's my favorite gadget."