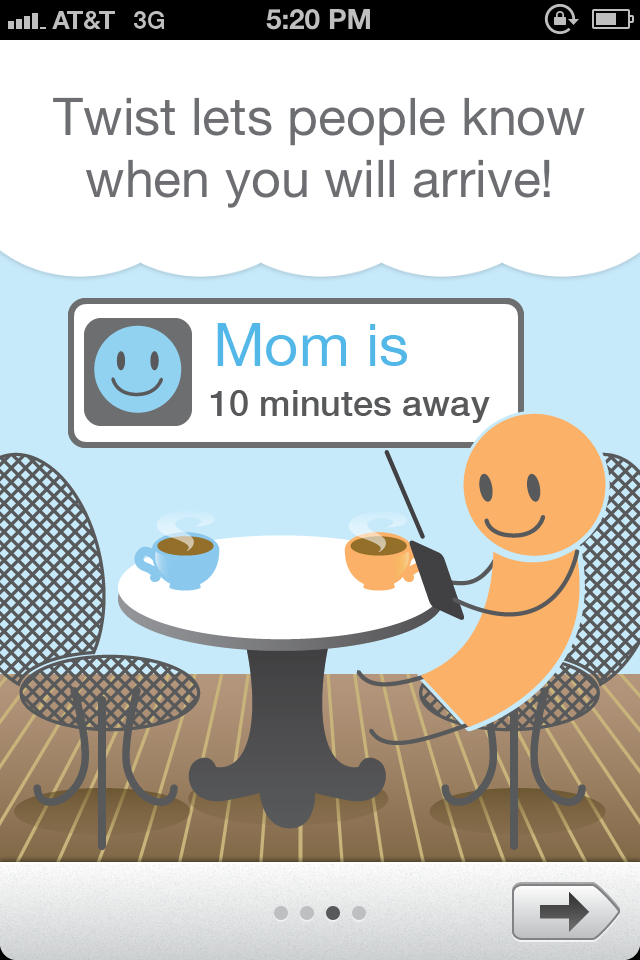 I'm sure this has happened to you.  You're late for a meeting, and the easiest way to alert the person you're meeting with is to text them. But darn, you're in your car and you can't text. What do you do? Well, nothing, unless you want a ticket. But next time, use Twist.

Twist is a new company, launching Wednesday, and announcing that it has raised $6 million in Series A funding from notable angels, including Twist co-founder Bill Lee, who also co-founded Remarq and Social Concepts, Twist co-founder Mike Belshe, who also founded Google SPDY project and co-founded Lookout, Eric Hahn, former CTO of Netscape and founding partner of Inventures Group, and Jeff Skoll, first employee of eBay and founder of Participant Media.

Twist is basically an iPhone app that allows users to inform others on their whereabouts and their ETA (estimated time of arrival).

"We have an opportunity to have an app that people use every day," said Lee, in an interview with me. "You’ve seen guys working on social, mobile, location – there’s a lot of 'where' being addressed, but we want to pioneer the 'when.' We want to be the first to focus on time [the ETA component], which is where the next big investment is going to be."

Indeed, many apps today focus on photo sharing, gaming, dating, connecting, organizing, and collaborating. And, sure there's calendar tools that help people organize a time to meet. But few focus on integrating the element of time, though services are beginning to emerge.

"Estimating time has long been underserved by technology," said Belshe. "Computing accurate ETAs involves quickly processing a tremendous amount of real time and historical data, all while compensating for GPS inaccuracies and preserving device battery life.  If your company isn't focused on 'when', you're just not likely to do all this."

Uber is one company that is embracing the concept of time and location as it allows users to text Uber for a town car and whichever Uber driver is available in the area and at that time can claim that ride. So long dispatchers.

While it's not entirely the same, Twist does eliminate the need to pick up the phone and text someone.

"I took over 200 meetings at the St. Regis and someone was always late," said Lee. "Twist solves this problem [of communicating one's status] by letting people know when a person will arrive."

The app is pretty easy to use. Just download it onto your iPhone. The app only works on the iPhone today. But iPhone users can alert someone on any phone that receives text messages. 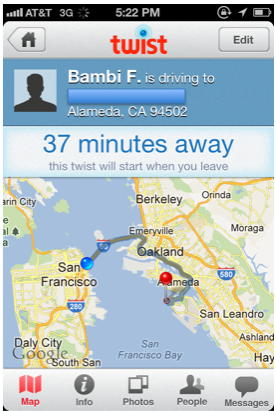 Open up the app, and it will ask you where you're heading. Type in the address.

Then it'll ask you who you're alerting. Type in a phone number or a name and the app auto-fills based on what's in your address book. Then that person receives a text telling them your destination and ETA.

I tried out the app the other day I was in San Francisco. I typed in my end destination and alerted the person I was meeting through Twist.

As soon as I left San Francisco, Twist sent a text message telling her when I'd arrive. Twist gives you the option to allow that person to see where you are on a map. But if you want privacy, it will just let the person know what your ETA is.

Since there was a lot of traffic that day, she ended up receiving four messages, updating my time of arrival. I didn't have to send her a text at all.

"When you create a twist, the highlighted route is the best route to take taking into account traffic and is updated live," said Lee. "For example, if you were on a journey from San Francisco to LA/Disneyland, and there was an accident in the grapevine, Twist would route you around it (assuming the accident didn't happen right in front of you). Similarly, if you clicked on the info tab of your Twist to Disneyland, you could see the weather there, the street view, and the Yelp review."

So where does it go from here?

"The idea is to eventually go after the long tail of the market (small businesses) with freemium features," said Lee. "For example, the local bike messenger business or the small town car service. We already see town car drivers using Twist to let their clients know when they will arrive... And, eventually, we want to release the Twist API and let peoplel integrate time into their apps/services."

Twist is the easiest way to let your family, friends and colleagues know when you will arrive.
Twist also alerts them when you are almost there and if you are running late. Whether you are driving, walking or taking public transit, Twist accurately calculates your arrival time to a specified destination and privately shares your ETA with only those that you choose.

What people are saying:

★ "Twist is a very easy-to-use app with an incredibly relevant purpose." – Wired

★ "Twist is a clever app […] It’s a really cool app for keeping people up to date on your whereabouts distraction-free.” – Mashable