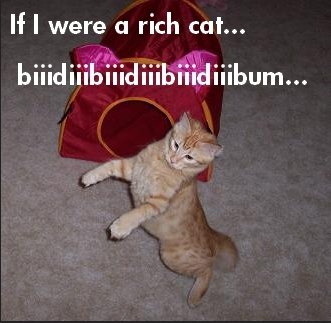 RIM has fallen on hard times, and just like everyone else who has fallen on hard times, you have to make some tough choices to keep the family alive.  That might mean chopping up the bedframe for kindling.  RIM knows how it is.  The company is looking at having to sell one of its corporate jets to cut costs and make a few extra bucks.  Like, $7 million.  But at least the children will have milk!

In his effort to save $1 billion through “significant efficiencies and operating cost reductions,” CEO Thorsten Heins is looking to sell RIM’s nine-passenger F50EX for $6 million to $7 million, according to unnamed insiders who spoke with Bloomberg.  RIM will be hanging onto its longer range 14-passenger F900EX.

RIM should be able to generate a few extra bucks from the sale of the jet, and the savings on operating costs will also help.  Bill de Decker of jet consulting firm Conklin & de Decker told Bloomberg that it typically costs about $2.1 million a year to maintain.

But in terms of raising enough cash to fill the $1 billion bucket Heins has set out, it’s not going to get very far.  The company would have to sell over 100 jets to reach that goal.

At RIM’s annual shareholder’s meeting on Tuesday, RIM confirmed that it is, indeed, searching for new board members.  Not just any board members—board members who actually know something about tech.  A Jaguar Financial representative asked Chairwoman Barbara Stymiest if the board would be looking for technical and marketing experience from the United States, to which Stymiest responded: “We understand the gaps that the board has."

The new follows RIM’s dismal quarterly earnings report two weeks ago, when it was announced that in an attempt to stanch the company’s hemorrhaging revenues, it would be slashing 5,000 jobs.  Revenue was down 33% to $2.8 billion in Q1 2013 from $4.2 billion the previous quarter and $4.9 billion in Q1 2012. RIM shipped 7.8 million Blackberry phones and only 260,000 Playbook tablets.

By comparison, Apple (which is scheduled to release its quarterly earnings report on July 24) sold 35.1 million iPhones and 11.8 million iPads last quarter.

Despite RIM’s many problems, CEO Thorsten Heins remains blissfully optimistic, telling Canadian reporters that the company is not, in fact, in a death spiral.

The company also announced it would be delaying the release of its critical Blackberry 10 OS until 2013.