Kevin Spacey on premiere of First Shot film ‘The Ventriloquist' 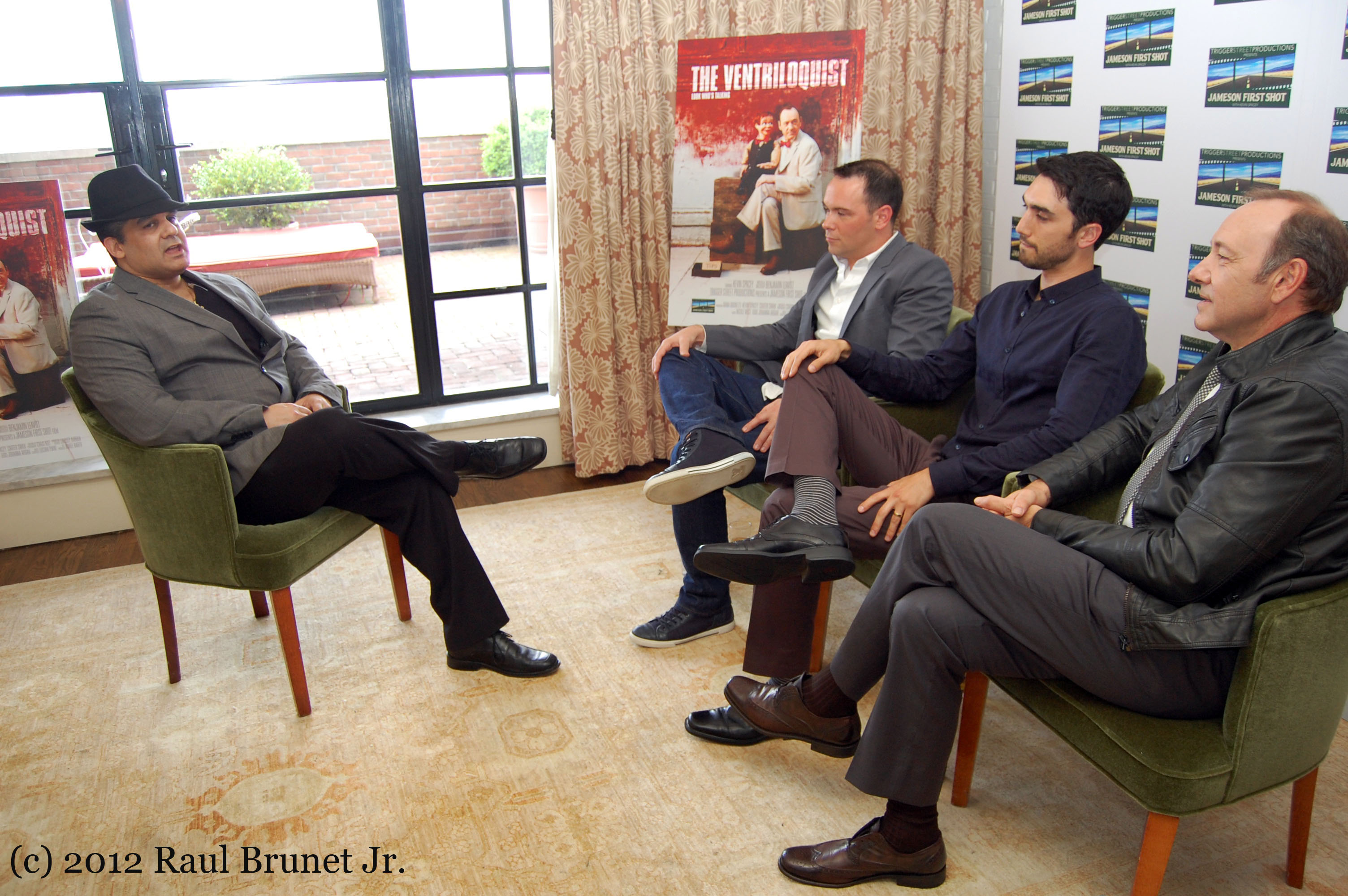 Oscar Winner Kevin Spacey is a maverick among actors in Hollywood. Kevin Spacey, along with Dana Brunetti, President of Trigger Street Productions and Benjamin Leavitt, writer/director and US winner of the Jameson First Shot for his short film ‘The Ventriloquist’ starring Kevin Spacey, shared in what was an incredible premiere in New York City. Benjamin Leavitt, was one of three winners out of 748 international entries whose script, ‘The Ventriloquist’, was chosen to be produced by Trigger Street Productions for the short film competition.

The concept regarding the competition is simple:

Trigger Street Productions presents a short film Written by YOU, Directed by YOU and starring Kevin Spacey.

When asked by Jameson First Shot to interview this amazing trio of talent before the premiere was an opportunity I wanted to be a part of. This competition has a deep meaning and Trigger Street along with Kevin Spacey went beyond just making films…they searched for artistic expression. I’d say that they have fine tuned their films which skillfully blend into a seamless flow. It’s heartfelt creativeness at it’s finest.

Being a filmmaker and CEO of Angel Light Pictures Entertainment Group, I can appreciate the efforts of Kevin Spacey and Trigger Street in evolving and helping future filmmakers to achieve their dreams. My mentor is Ted Kotcheff a famous Canadian Hollywood Director who has helped me over the years. It’s in giving back and paying it forward that one can find the true meaning of character and success.

Kevin shared his vision quest and his support for this distinguished venture in the interview below:

I spoke to the director Benjamin Leavitt and ask him about his excitement about this being his first premiere.

Let’s start with you Benjamin. You are a few hours away from your own premiere. How are you feeling?

Benjamin:  I feel very excited and it is quite overwhelming to attend your own premiere in New York City which I consider an exciting place to be. I am hoping everyone enjoys watching the film as much as we enjoyed making it – the 2 days of filming were an incredible learning experience for me.

How was it working with an A-Lister actor like Kevin Spacey? Did you feel any pressure?

Benjamin: No, I did not feel any pressure at all just a bit intimidated at first, but honestly after a few days of working with Mr. Spacey I realized how passionate and very kindhearted he really is. I totally appreciate and very thankful for all the support and encouragement that both Dana and Kevin have giving me with this wonderful opportunity.

Dana: We all couldn’t be more thrilled with the finished film and Benjamin did an amazing job directing and we all had an input of the final cut of the film.

How do you think Benjamin will do against the Hollywood Big leagues? How was his performance when directing the film?

Dana: We at Trigger Street Production hope that Benjamin takes what he has learned from this exciting experience and continue to succeed because that will mean that our philosophy and purpose in doing this works. We want to be able to give talented people out there a shot at reaching their goals for the first time. We are hoping that this competition will open up a path for Benjamin and give his emerging talent the opportunity he deserves. It is up to Benjamin what he decides to do after this competition is over. We hope he will continue because he did an amazing job directing this film.

Is Hollywood Tough when negotiating business?

Dana: I feel there is no different between New York and Hollywood when dealing in this business.

Mr. Spacey, I admire you for your work and for what you are doing for upcoming filmmakers in the business. I am a believer of mentorship and helping others. I myself have a great mentor, Ted Kotcheff, a Canadian Hollywood director who shares the same passion as you do.

How do you find the time to juggle your career and at the same time take time to help others?

Mr. Spacey: My mother raised me right! I owe everything to my mother. In addition, the great Jack Lemmon was my mentor and once said to me  - “If you’re doing well, send the elevator back down,”  These words served as an inspiration behind Trigger Street. I’ve done incredibly well and it’s because the material I found early in my career was from first-time writers, first-time directors, first-time playwrights. If it weren’t for that talent I wouldn’t have a career. So if one person gets a break then the competition has been successful. This is my way of giving back and that is why I am here today.

Why South Africa, Russia and not other countries for looking for talent? Was it a reason for choosing theses countries?

Congratulations to all of you for what you have accomplished and I wish you many success tonight. Thank you and I will meet you on the Green Carpet at New York’s Highline Stages in the Meatpacking District.

The Ventriloquist is available to watch now on youtube.com/jamesonwhiskey

Any budding directors who think they have what it takes to be the next winner from the USA can register their interest now at jamesonfirstshot.com to make sure they get all the updates on next year’s competition.

To see more pictures and information please click below.

For more information on the competition, as well as behind-the-scenes images and additional on-set content please visitwww.jamesonfirstshot.com/press.