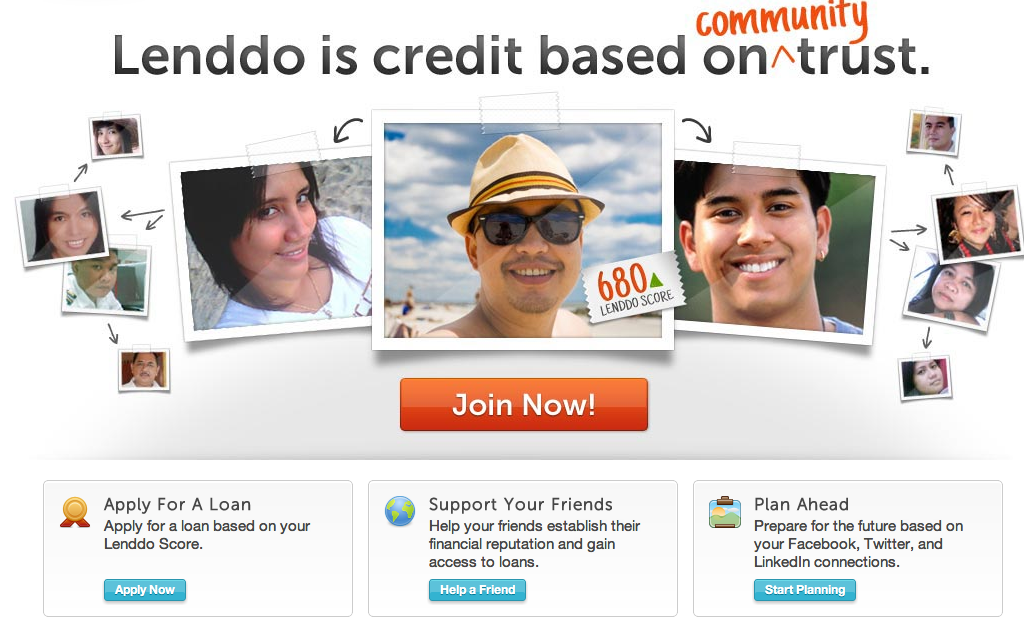 If you're middle class in an emerging market, you're probably aware of the difficulties in getting a loan. In fact, in the U.S., the debt-to-income ratio is more than 100% while in emerging countries, it's closer to under 10%, meaning there are a lot of people around the world who are underbanked, in many ways because financial institutions cannot verify who they are.

Yet many of these underbanked qualify for a loan, if only there was more transparency around their identity. Thanks to Facebook, LinkedIn and Twitter, that information can be found, and one company - Lenddo - is trying to surface that content in a way that makes sense in a micro-lending context. Apparently, they're doing something right.

Lenddo, which matches the underbanked middle class in emerging markets with financial institutions that can lend them money, announced Tuesday morning that it's raised $8 million in a Series A round of funding from Accel Partners, Blumberg Capital, and Omidyar Network, as well as Montreal-based iNovia Capital and New York-based Metamorphic Ventures. Bruce Taragin of Blumber and John Elton of iNovia will be joining the board. Other investors include Barry Silbert, founder and CEO of SeondMarket (and an investor in Vator), Geoff Judge, David Kidder,  and Scott Heiferman. Prior to the investment, Lenddo received a small amount of funding from FinTech Innovation Lab, a NY-based incubator for financially-focused start-ups.

Currently, Lenddo - which is based in NY, Manila, Philippines, and Bogata, Columbia and founded in 2011 - is used as a way for the middle class in the Philippines and Columbia to access loans or to establish a Lenddo score so they can borrow money, said Jeff Stewart, co-founder and CEO of Lenddo, in an interview with me.

The typical member is 26 years old, part of the digital economy, is an urban professional, and who is in many ways qualified to receive a loan, according to Stewart, who came up with the idea of Lenddo, along with co-founder Richard Eldridge, partly because he employed many of them in the Philippines.

But unlike the US, where drivers licenses, utility bills and credit scores are used to identify the credit worthiness of a person, in many emerging countries, that information is not available, he said. To that end, Lenddo exists to "crowdsource their reputation," said Stewart.

The way this happens is a member is encouraged to get people to "vouch" for them in order for them to get a loan. The more people vouching, the higher the likelihood of their loan approved. This not only helps Lenddo understand its member, but it helps drive more members.

The vouching is bi-directional, meaning both sides vouch for one another. "We’re essentially crowdsourcing your trustworthiness by having people vouch for each other," said Stewart. The average borrower has four people in their trusted network vouching for them, added Stewart, who wouldn't disclose how many members are on Lenddo, only to say there are "tens of thousands" in the community, many of whom are not getting loans but vouching for others.

By having these connections, Lenndo can then do some analysis.

The information parced out of the social networks is three-fold. Firstly, the company looks at homopholic relationships to verify if a person is saying who she/he truly is. For instance, if a person says he/she is an accountant, it's likely their network would be filled with accountants or others in this professional ecosystem, and not say, a bunch of high school students. The system also looks at homopholic relationships to see if a person's network consists of people who pay back their loans (of course these folks would have to have borrowed money on Lenddo as Lenddo doesn't look at third-party credit scores). Secondly, the system looks at the Bayesian probabilty of whether, in this example, accountants are typically good borrowers.

The lender of loans, at the moment, is a company set up by Lenddo. Eventually, Lenddo hopes to work with financial institutions and connect them with the borrowers. The typical loan amount is about the monthly pay of a worker. In Bogota, that amount is $800 and in the Philippines, it's $400 to $500. Borrowers pay the lower of 2% a month in interest, or two-thirds of the going lending rate, which is typically about 3% to 4%. Loans can be taken out for three months, six months or a year, with the average loan duration being nine-and-a-half months. Stewart wouldn't disclose how many loans the company has made and he couldn't say what the approval rate or default rate is, only to say that repayment rates are in line with the micro-finance industry, which is 98%.

Many of those borrowing on Lenddo are doing so for medical, re-location or educational reasons.

Lenddo.com is the first service to use online social networks and endorsements to calculate credit worthiness.

Lenddo seek to improve the lives of millions. The community helps members use their online reputation to access financial services, which in turn fosters economic development, and a better standard of living.

The Lenddo community is designed to empower the emerging markets middle class by providing simple tools to manage financial reputation, help their community and connect with interested institutional lenders.

Lenddo was started with the belief that professionals in emerging markets should have access to the same high level of financial products and services as are enjoyed in more mature financial markets such as Japan, Germany, United Kingdom and the United States. The Lenddo community helps its members measure and maintain their online reputation, with the goal of providing a Lenddo Score that can help access credit and other financial services.

Jeff Stewart is a serial entrepreneur, inventor and investor specializing in internet-enabled growth businesses. Jeff is the founder an CEO of Lenddo