Mobile payment startup eyes the path of Square, but with a bigger focus on loyalty perks 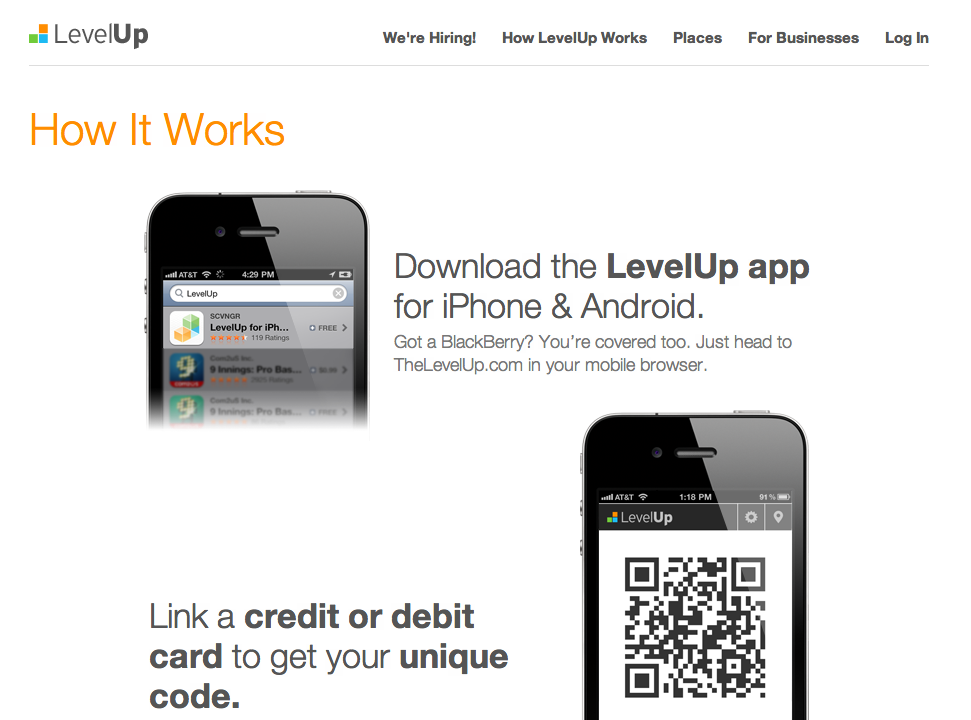 The mobile wallet market has reached a fever pitch this year. With tech companies zoned in on turning your mobile devices into methods of payment, consumers are going to find a lot more value in keeping their smart phones close -- and merchants are clamoring to pick the services that give them the best competitive edge.

One Boston, Mass.-based startup is trying to put customer loyalty front and center in its mobile payment application.

LevelUp uses a QR-code to help consumers instantly pay for their food at a restaurant while tying in loyalty specials so that merchants reward their most diligent patrons.

Matt Kiernan, marketing director at LevelUp, chatted with me about how many companies are trying to use technology to make the checkout process easier for consumers while learning more about them.

"When customers have a quick and easy way to do business with a vendor they love, they end up shopping their more and spending more money," Kiernan has found. "Wait times are going down and the amount people spend is rising when these simple tech additions are incorporated."

Now in roughly nine cities, LevelUp charges a 2% flat fee to merchants and is free for consumers to use. No fumbling for your credit card or signing anything, just hold your QR code up to the reader.

Many of the businesses have made sure to incorporate $5 off or other deals for people using the app to purchase from the company.

Merchants also have the option of renting the scanner for $25 or they can download an app for their mobile device for free that also reads the QR code. This make a faster check-out option much more affordable for small businesses and vendors that are mobile themselves.

There are also some fun bells and whistles on the merchant scanner, if a company wishes to use it. They can customize the colors that flashes when the code is successfully scanned. LevelUp is also eyeing the POS side of retail/restaurants.

"We are hearing great things from the more than 2,500 companies using LevelUp and they are also asking how they can streamline their whole checkout process," Kiernan touted.

LevelUp certainly isn't alone in its desire to advance the POS systems that usually cost a lot of cash up front, are confusing to use, take a long time to get repaired and are not mobile in the least.

San Francisco's mobile payment service Square, founded by Twitter's Jack Dorsey, first tackled the credit card machine by creating a an iPhone accessory to mobilize, digitalize, and simplify what is needed to complete a credit transaction and now it is expanding its reach by re-thinking the whole POS for businesses.

Earlier this month, LevelUp announced an iPad POS system with Revel Systems (a cloud-based POS system) so that retail, restaurant, and other merchants can now easily accept mobile payments via LevelUp with no additional set-up or equipment required. The fully integrated POS system debuted at Palo Alto’s Tava Indian Kitchen a few weeks ago and is expanding through the company's network.

“We believe our open API and our partnership with LevelUp is a win-win for both businesses and consumers alike,” said Chris Ciabarra, Revel’s Chief Technology Officer. “And while other solutions on the market are keeping a tight grip on their POS ecosystems and building everything internally, Revel Systems is committed to building open commerce and a shared environment that’s ripe for a multitude of beneficial partnerships for merchants - like this new integration with LevelUp.”

LevelUp is confident that more consumers will find a greater level of personalization, savings, and security in mobile payment services.

Since LevelUp, and others, offer a pin code option so that each time you are about to complete a transaction, you have to enter a unique pin to insure that someone can't just use your phone for fraudulent purchases, it is technically safer to use than your wallet full of cash.

With mobile-payment technology in the United States is still in its infancy, we can expect credit card companies and the mobile payment service will spend the next year or so educating people and working with one another to create better protections to avoid fraud when moving toward convenience -- especially since everyone is expecting Visa to deliver its own proprietary payments system very soon.