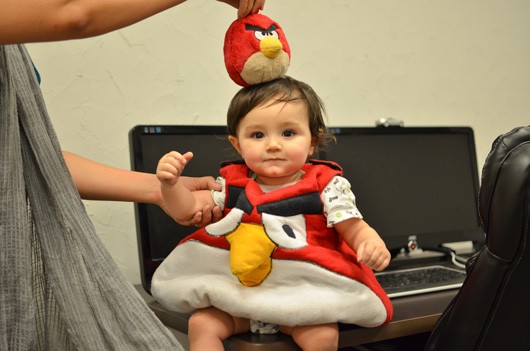 The other day, I was standing in line at a store with my five-year-old son, who asked me to buy him some Angry Birds candy. This follows a recent purchase of an Angry Birds sweatshirt, and an Angry Birds stuffed animal for his backpack. We must have about 12 variations of Angry Birds apps on my iPhone and iPad. He even tells friends that our Roku box in the family room is not for movies, but to play Angry Birds. He is an Angry Birds junkie.

He is not alone. Finnish game developer Rovio Entertainment, which was founded in 2003, announced Monday that thanks to three games - Angry Birds, Angry Birds Season, and Angry Birds Rio - its total game downloads has now hit 648 million.

Nearly a third, or 30%, of Rovio's revenue last year came from merchandising and licensing activities. The company was working together with more than 200 licensing partners on developing new products and services within the Angry Birds franchise.

The news could help position Rovio for an IPO next year. "This company is preparing itself and getting ready," said Anders Lindeberg, Rovio's head of investor relations, referring to an IPO offering, in an interview with Reuters.

Last year, IT entrepreneur Niklas Zennstrom, the founder of Kazaa and Skype, joined Rovio's board after his venture-capital firm Atomico Ventures participated in a $42 million financing round for the company. Other owners include angel fund Felicis Ventures and $6 billion venture-capital firm Accel Partners.