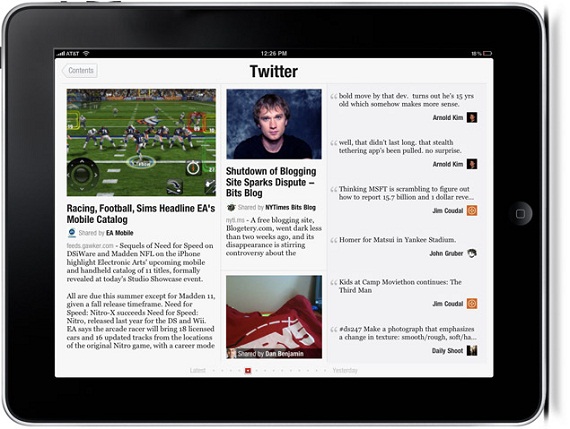 Popular mobile app Flipboard, which allows users to flip through Web pages on their mobile devices like a magazine, has added one million new users since launching its iPhone application only one week ago, says one report.

Flipboard had been the go-to content viewing app for the iPad, but the inclusion of the iPhone platform has pushed Flipboard over the five million user mark, across iOS.

When still only on the iPad, Flipboard recorded 650 million "flips" per month. Since expanding into the iPhone, the app is well on its way to hit the two billion flips-per-month mark. Demand for the app was so high, the site's servers crashed the morning after it launched, though this has clearly dissuaded no one from getting their hands on it.

the current iteration of Flipboard's app is powered in part by tech from Ellerdale, a relevance engine the company had acquired back in July 2010. This tech, implemented in the new iPhone app, creates a "Cover Stories" profile, using reader social networking interaction, as well as content curation, to establish a personalized set of stories for users.

Last week also saw an update to Flud, a content delivery app for iPhone created by Zite. Also launched last week was Google Currents, which some have called a rather lacklustre Flipboard competitor, available on both iOS and Android.

Flipboard co-founder Evan Doll told one news source that developing an Android app is a priority for the company, but could not give a timeline for its release. Flipboard took nine months to build the iPhone app.