A growing percentage of Internet users go online with no goal, or for fun, especially young adults 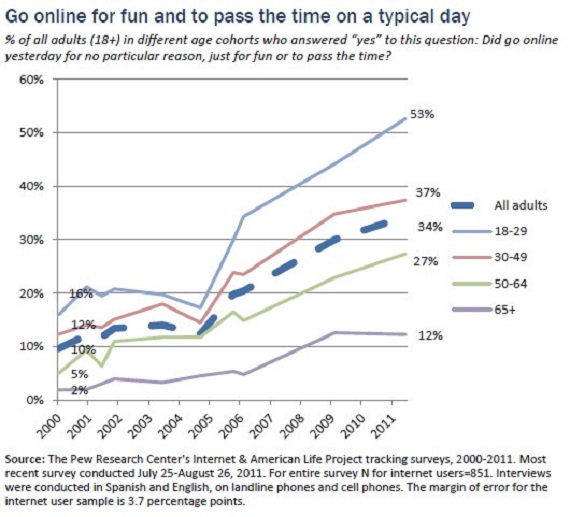 Reader beware, lest ye be sucked into a Web vortex of social networking and cat videos. A new study by the Pew Internet and American Life Project has found that American Web users, especially young ones, are increasingly finding their way online for amusement or to pass the time, rather than to get work done.

In other words, get back to work, slacker! ...preferably after you finish reading this article.

The study found that 53% of Americans aged 18-29 go online without any particular purpose in mind, or "for fun," with 81% of this same demographic reporting that their Web usage reflects this somewhat aimless approach, at least occasionally.

Other findings in the study suggest that Web fun-seeking / aimlessness is actually increasing, not just in young people, but across the age spectrum. 58% of all adults (or 74% of "online adults) responded to the survey that they use the Internet without any particular purpose. Interestingly, only 34% of them said they used the Internet in such a way "yesterday," or the day before they have been questioned.

The good people at the Pew Research Center believe that three main factors have caused this trend: wider availability of broadband, proliferation of Internet video, and (you guessed it) the explosion of social networking. (Thanks Facebook, for setting our minds adrift in a sea of aimless leisure time!)

To a lesser extent, the Pew Research Center also interpreted their data to suggest the ways that the Web surfing is replacing other American leisure activities, like television and radio. This conclusion is slightly more tenuous, however, because the surveyors recognize that so-called competitors for leisure time, like T.V., can be readily found on the Web.

The Pew Internet and American Life Project is but one of seven different research initiatives being currently conducted by the Pew Research Center, a nonpartisan, nonprofit "fact tank," the goal of which is to provide data on American life. Other areas of study undertaken by the Pew Internet and American Life Project include families, communities, work and home, daily life, education, health care, and civic and political life.

So have "fun" browsing the Internet aimlessly, America!