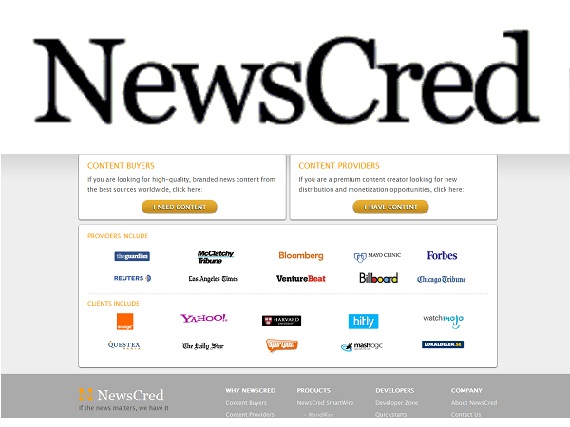 Astonishingly, this new funding also marks the third time NewsCred has completely revamped the nature its service since the company's inception in 2008.

NewsCred debuted, just like the name would suggest, as a news credibility service, using algorithms and communtiy voting to determine which stories were fit to print for publishers and authors. However, when this failed to significantly succeed, NewsCred reinvented itself in January 2010 as a platform for consumers to create their own customized news source, by indicating interests and building an online news space that reflected those specifications, free for the customer, with a premium option.

But since neither of those ideas really took off, NewsCred has once again rebuilt from the ground floor up. This most recent (and hopefully last) iteration of NewsCred is an innovative take on the news wire service, culling from over 700 media outlets and charging to deliver curated content on the enterprise level.

NewsCred syndicates fully licensed content from participating media sources to blogs, brands, and independent publications. Interestingly, NewsCred wants to put the control of said syndication largely in the hands of the client, offering a platform for businesses to set their own terms of service and approve what is delivered to the reader.

NewsCred providers include Bloomberg, Forbes, and Venture Beat, and their clients include The Daily Star, Yahoo, and Harvard University. The company's tech is "platform agnostic," according to one report, able to deliver content on mobile, tablets, Facebook, and the Web with equal effectiveness. The company's business model is based around charging for its API, according to how much news is accessed and from which publications.

"Our mission is simple: get the world's best content through one platform, and personalize it for each publisher," says the company's website.

Let's hope this latest venure finally sticks. NewsCred could not be reached for immediate comment.