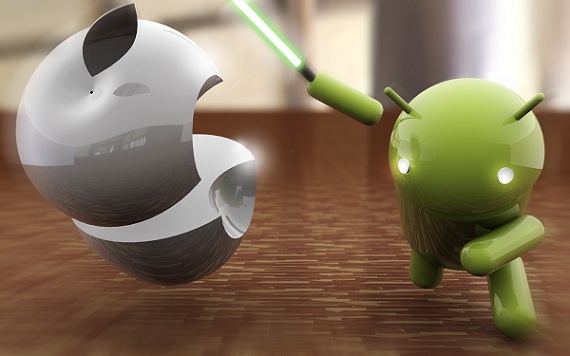 While Apple's iPhone dominates mobile phone makers as the No. 1 phone in the market, Android phones dominate the share of ad impressions across mobile platforms.

Android has beaten all other mobile OS systems for the past 11 months, of those measured by Millennial. 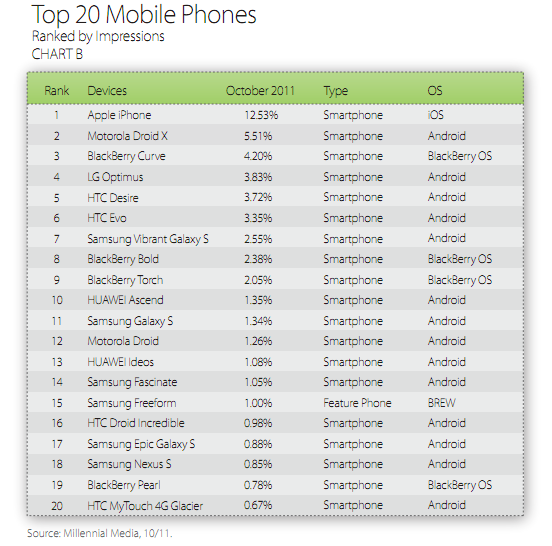 Founded in 2006 by CEO Paul Palmieri and CTO Chris Brandenburg, Millennial Media is a leading mobile ad platform in the U.S., with $64.8 million in funding from investors like Bessemer Venture Partners, Columbia Capital, and Charles River Ventures, among others.

As an online ad network, Millennial aggregates ad space from publishers and match it to advertisers, based on the nature of the space and what is being advertised. Millennial can boast 142 million mobile uniques per month. Twenty of the top 25 Ad Age advertisers partner with Millenial, and they have a 90% customer retention rate. Millennial's monthly ad requests number at 23 billion.

Translation: Millennial's report is a pretty good indication of where the mobile ads are going, and thus which mobile OS is winning the mobile wars. 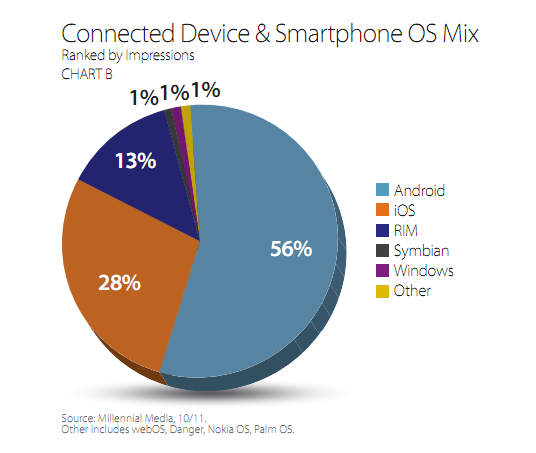 Apple's iOS took second place behind Android, with 28% of the ad impression pie, with RIM coming in third, with 13%. Interestingly, iOS took the lead in ad conversion for the Connected Device category, when Smartphones were not factored in, having the leading tablet device on Millennial since its debut in April 2010.

But for all Android's impressive numbers, Apple predictably provided a few impressive stats as well. The iPhone continued its reign in the Mobile Phone ranking, bringing in 13% of ad impressions. And Apple was the lead of the Top 15 Manufacturers category, with 24% of ads converted.

Some have drawn connections between Android's surge and Apple's relatively low Q3 earnings reports, while others continue to attribute Apple's less than totally dominant Q3 reports to the impending release of the iPhone 5.

[Image Credit: by aoisora9x on webtrickz.com]