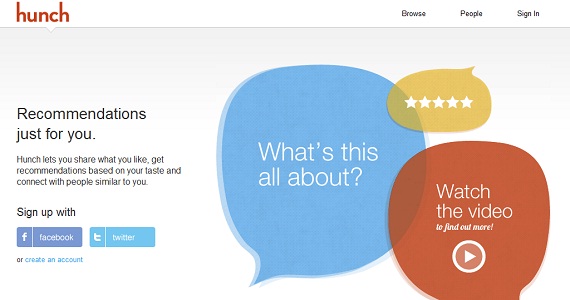 Ecommerce service eBay announced Monday its acquisition of Hunch, an online platform that scans user data and offers user recommendations based on taste. Hunch's core technology, which it calls a "taste graph," collects data from a wide array of online sources, including social networking, to compile user profiles and make taste predictions.

Hunch's co-founders, Chris Dixon, Tom Pinckney and Matt Gattis, will remain with the company, though it is unclear how autonomous the company will be after the acquisition. Catarina Fake also co-founded Hunch, though she left last summer. While the terms of the acquisition have remained undisclosed, sources have put the price tag at $80 million. Hunch's New York offices are expected to swell to 200 employees.

“With Hunch, we’re adding new capabilities to personalizing the shopping experience on eBay to the individual relevant tastes and interests of our customers," said eBay CTO and VP of Global Products, Marketplaces, Mark Carges, in a press release. "We expect Hunch’s technologies to benefit eBay shoppers as they browse and buy, and to bring sellers on eBay new ways to connect the right products with the right customers.”

The most obvious application of Hunch's tech for eBay is to use online profiles to direct online shoppers to relevant items for sale. But some expect eBay to use Hunch's tech for applications other than ecommerce taste predictions. One speculation has Hunch predicting U.S. financial market trends based on eBay sales and selling this data to interested parties.

Based in New York, Hunch opened to the public in the summer of 2009 and to date has raised more than $19 million in funding. Past Hunch investors have included General Catalyst Partners, Bessemer Venture Partners, SV Angel, and Khosla Ventures. Hunch's core algorithm was written by MIT computer scientists with backgrounds in machine learning, according to the company website.

Hunch's business model to this point has been based around the collection of referral fees, when their recommendations link to online retailers. Hunch's "taste graph" enables it to make recommendations to 500 million people.

Hunch has made waves recently, not just for predicting users' spending habits, though that will likely be the application of its tech for eBay, but for predicting a wide variety of user tastes based on data that would on the surface seem irrelevant.

For example, in an infographic for AdWeek, Hunch grouped users in terms of their being "nervous flyers" or not, based on their affinity for mechanical pencils over wooden ones. In a similar one for Mashable, it predicted users' political leanings based on their eating habits.

Perhaps most notably, Hunch has a Netflix Predictor, which can accurately predict a given user's tastes in film, even working around something those in the film taste prediction business call "the Napoleon Dynamite problem," where quirky, polarizing films create a dynamic of almost impossible taste values in individual users.

Hunch's competitors include site like iGuiders, which helps users find products based on their online histories, as well as Baduku, which informs users with more broadly-based questions, from cultural trends to politics. Another competitor, Ayax is more business-to-business oriented, creating user data profiles to create taste solutions on the enterprise level.