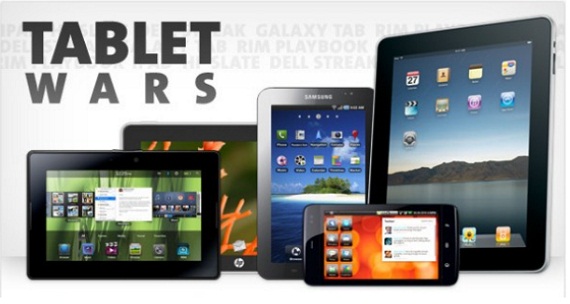 The rollback of tablet production by these major manufacturers is believed to be in response to sustained popularity of such competitive devices as the iPad, the Kindle Fire, and the Nook Tablet. These sources have indicated that the aforementioned manufacturers are likely to "phase out of the market."

As to why the iPad, the Kindle Fire, and the Nook Tablet are generating more green for their manufacturers? Many reasons, not the least of which being that these hardware products are used as conduits for the merchandising of other products made by their parent companies.

Except Amazon's real profits will be recouped in the promotion of Amazon merchandise through the tablet, and not just software to be run on the Kindle Fire, or e-books and music from their online library. Amazon makes most of its money through the sale of physical retail products, which can be promoted heavily on the tablets. So while the Kindle Fire doesn't bring in directly through the sale of apps and e-books, or through its own earning power, Amazon is betting it will through the promotion of clothing, food items, and other more conventional merchandise sales on Amazon.

Kindle Fire and the Nook Tablet have generated some impressive buzz in North America, in no small part because of the affordable price tag for the latter.

But of course, the iPad remains the king of the tablet game, with projections putting 2011 sales of tablets with the iOS platform at 73.4% of the market, while those with Android platform have only 17.3%. Apple's numbers are down from those of 2010, when it held 83%. But it's clearly still well ahead of the pack.

Android numbers are up slightly from 2010's 14%, with one factor of its continuing inability to significantly compete with iOS being fragmentation of Android across smartphone and tablet platforms. This is one of the factors Google intended to alleviate in the release of their new Android, the Ice Cream Sandwich, last month.