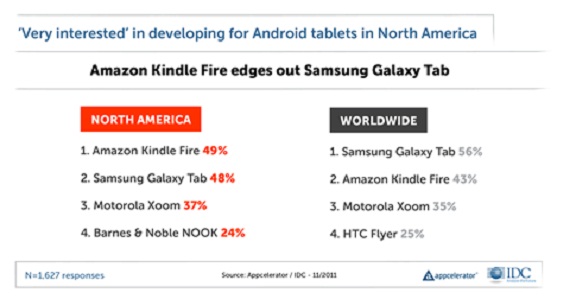 North-American developers are crazy about the Kindle Fire, according to a survey conducted by app framework company, Appcelerator. The soon to be released Kindle Fire is shown in said survey to be much preferred over any other Android tablet, among those in-the-know developers who got a sneak peek.

The survey was conducted in conjunction with Appcelerator's Q4 Mobile Developer Report. The findings show that interest in the Kindle Fire among North-American developers is like to that shown for the iPad prior to its launch in April 2010. The Kindle Fire had 49% in North America as compared to the iPad's 53%, at the time of its release last year.

The Amazon Kindle was bested in Europe and Asia only by the Samsung Galaxy Tab,  in the recent Appcelerator survey, with the Kindle's averaged worldwide interest coming in at an impressive 43%. The report also showed that Microsoft's Windows Phone 7 has moved ahead of RIM's BlackBerry OS to become the 3rd most-preferred mobile OS behind iOS and Android.

Intersestingly, the Barnes and Noble Nook Color was shown to be only half as popular among developers as the Kindle Fire, though the new Kindle's likely biggest competitor, the Nook Tablet, doesn't seem to have been taken into account in the survey at all.

This survey found that 44% of people queried would purchase the relatively cheap Kindle Fire, rather than the iPad 2, which starts at $499. Conversely, the same percentage of people said they didn't know enough about the Kindle Fire, so the numbers would seem almost completely motivated by the tablet's low price tag, with little consideration of how the quality of the two products stack up.

Also interesting, 35% of those queried in the Retrevo survey believed the Kindle Fire to be only another generation of the Amazon e-reader, rather than a full-fledged tablet. And like the Appcelerator survey, the Retrevo survey did not include questions about the Nook Tablet, with its $249 price tag.

Similar findings by marketing research fim ChangeWave were published only a few days ago. In a survey made among 2600 consumers, data showed demand for the Kindle Fire leading up to its release, again, similar to that of the iPad's 2010 release.

Also cited among concerns of those developers surveyed was the fact that all Android apps run through the Kindle Fire will require approval by Amazon.