With IPO around the corner, Zynga looking to take back some stock from employees

Zynga CEO Mark Pinus learned that the media and his employees were not so keen for the idea of going back on  a promise -- especially when that promise involved the unvested stock for the company on the verge of IPO.

Today, people are still curious who at Zynga might lose their stock or be spurred to use litigation to protect the assets promised to them.

Fobes got ahold of an email Pincus sent the company about the "meritocracy" Zynga is and how the company's intentions to handle its stock and that the company intentions were painted in a "false and skewed light." 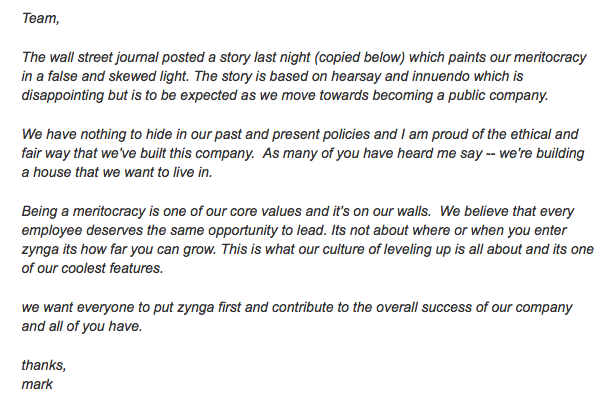 The Wall Street Journal reported that Zynga was re-evaluating the stock they had given to certain employees. Perhaps Pincus and the Zynga financial team felt that they had doled out more stock to employees than they should have.

Quickly, this search to figure out who's unvested stock could be redacted became a reenactment of a middle school playground where 'no-take-backs' is often a rule.

Many rapidly growing companies in Silicon Valley opt to supplement employee salaries with stock options so that the businesses can keep more cash on hand for growth. The San Francisco-based socail gaming site, can attribute some of its cash rich position to some of the same stock sharing tactics.

But before the options convert to real shares there is a lot of wiggle room from the company to buy back shares or fire the employees and obtain the shares once again.

Pincus, instead, appeared to want shares back and keep his employees, which straddles the line of what is fair for the company and the employees.

Depending on the amount of stock that Zynga is looking to get its hands on, the clear solution would have been to have some of the management offer up a sliver of their shares to the company. You would think that Pincus might have a few shares to spare. But we can chalk a lot of this ninth-inning scramble to the fact that Zynga issued 33 million in new stock for the 2010, which was just too much to offer out so early in the game.

However this share redistribution shakes out, I see it having little or no effect on the actual IPO, estimated to take place soon after Thanksgiving, but it is a PR hiccup that Zynga did not want to experience.