The company is backed by Innovation Endeavors, Genesis Partners, Blumberg Capital, and more 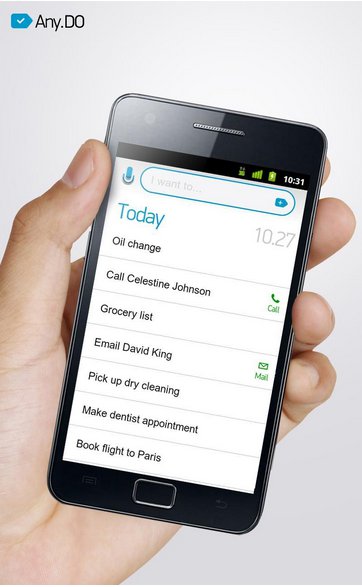 I need a list to keep track of all my lists.  There’s my grocery list, my to-do list, my weekend to-do list, my today to-do list, my to-do list for next month, my husband’s to-do list (I believe some people call this a "honey-do" list. I call it a "get your ass outside and mow the damn lawn" list), and so on and so forth.  Today a new list-making app launches just for Android users, and it comes with a few nifty features, including the ability to share and collaborate on lists with others.  Any.DO launched Thursday with $1 million in funding from Eric Schmidt’s Innovation Endeavours, Genesis Partners, Blumberg Capital, Joe Lonsdale of Palantir, Aydin Senkut of Felicis Ventures, and Brian Koo.

Any.DO is brought to you by the same guys who created similar list-making Android app, Taskos, which launched last year and has since garnered some 1.3 million users.  Any.DO was launched with the aim of offering a simpler and more effective user experience, and Taskos users will be invited to migrate over to the new app.

"We have taken the best productivity bits that people loved from Taskos and rebuilt Any.DO from scratch with a social engine at its core," CEO Omer Perchik told me.  "Taskos was popular because it was beautiful and simple, so we have retained those qualities, but made it much, much smarter.  Now you can list, assign, share and update your tasks, even with people who don't have the app."

The app is wonderfully simple and easy to use.  For starters, you can create lists by speaking into your phone and listing off your tasks verbally.  To erase tasks, simply give your phone a good shake, or swipe your finger across a task to market it as complete.

Perchik declined to disclose the company’s business model, but he did tell me that the iPhone app is on its way and should be available in the coming months.

The app is currently available for free for Android devices.