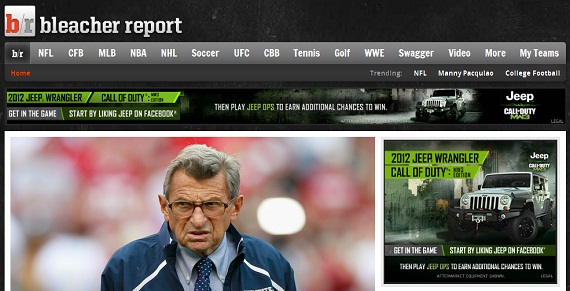 Among these enhancments will be a focus on HD video on the site, as well as original programming in conjunction with YouTube. YouTube announced October 2011 that it had partnered with Bleacher Report, along with dozens of other content sources, to create a new channel on the video streaming site.

"Bleacher Report in such a short period of time has revolutionized the way sports content is created and consumed," said Bleacher Report Co-Founder and VP Video Programming and Production Dave Nemetz, in a press release.

"With this new investment in video, Bleacher Report is building on its commitment in providing sports fans with the best overall experience with content that is both compelling and entertaining while giving our advertising partners a robust environment in reaching a highly coveted audience with tremendous purchasing power."

Bleacher Report has hinted that several new shows will roll out from now into 2012. Some video reporting will also feature team-specific and topical material, putting a focus on minute esoterica of the sports world in short-form video vignettes.

To date, Bleacher Report has received $40.5 million in investments, from Oak Investment Partners, Crosslink Capital, and Hillsven Capital, among others.