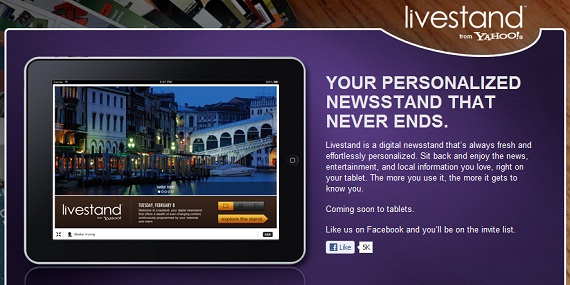 The news and social reader space for mobile tablets is about to get a lot more competitive, as both Yahoo and Google plan to the launch their news/social networking apps in the next two weeks.

Sources close to the decision said that Yahoo will launch its new mobile app called Livestand "next week," according to AllThingsD. Also next week, or sometime soon after, Google will debut its news/social app for mobile, code name: Propellor. Reports also have the name "Currents" under strong consideration for the Google app.

These apps will offer stiff competition to an already crowded market. Other similar apps currently on the scene include Flipboard, AOL's Editions, CNN's Zite, and Pulse. Flipboard is arguably the most in-demand, but is only available on iOS.

Flipboard, which was valued at $200 million this summer, turned down an offer by Google to buy them out last year, said sources. Google informed Flipboard at the time of this denial that it would create a similar news platform to compete with them. And now it sounds as if Google has made good on that promise.

Yahoo's former CEO Carol Bartz, whose September 2011 firing was much publicized, announced and demoed Yahoo's news and social networking app in February 2011, calling the app "content in context." Yahoo Chief Product Officer Blake Irving echoed Bartz's sentiment at the time, characterizing a company that has suffered from an identity crises over the past few years, as "the premiere digital media company in content and context."

However, in spite of the early buzz for Livestand afforded by Bartz's demo, Yahoo is launching its app simultaneous with Google's, which already has a leg-up with its integration with Android products. Flipboard also represents a formidable competitor, having already established itself as the app to beat.

Another notable news app Pulse is a much smaller-in-scale business but is frequently recognized by industry insiders for its innovative platform.

Neither yahoo nor Google could be immediately reached for comment.