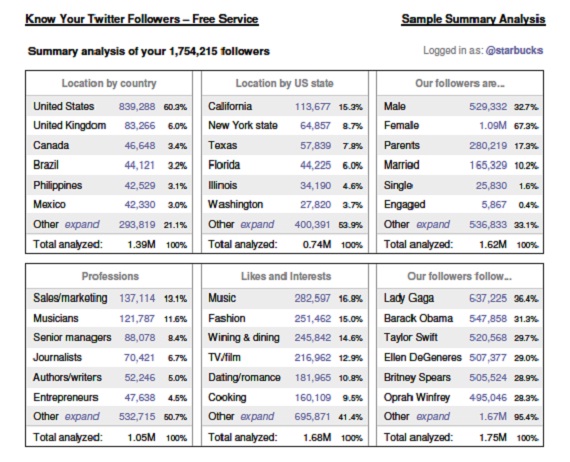 We all know that a certain percentage of our Twitter followers are spammers. But is there a better way to really know who's following us? Apparently, there is.

Schmap launched Thursday a new "Know Your Twitter Followers" app that analyzes Twitter followers according to gender, marital status, profession, likes and interests, and location by county and U.S. state, the company told Vator News. Schmap is known for their digital travel guides, for destinations throughout Europe, U.S., Canada, Australia, and New Zealand.

The new Twitter/Schmap app functions on a freemium model, where the free version analyzes followers by the above stated criteria, while the paid version digs deeper, finding location by city, technology uses, and Twitter activity.

"Our primary success metric as we launch 'Know Your Twitter Followers' is to establish this as a reliable and insightful service with a large number of Twitter users," said Schmap CEO and co-founder Paul Hallett to Vator News. "Based on initial demand as we move to public Beta, we expect a million Twitter users will analyze their followers with our service over the next four weeks."

The pay plan costs from $4.95 to $24.95 for individuals, merchants, and charities and from $39.95 to $149.95 for businesses. "Over the next few weeks, we'll be adding further optional paid services for commercial users, allowing deeper analysis, and targeted promotion to their own followers," said Hallett.

The app uses natural language analytics that semantically process information Twitter users make public through in their location and bios.

Twitter Web Analytics is currently available only to developers. And as of yet, the new Twitter Schmap app is still in Beta. Vator News tested out the Schmap app and got a message saying the results may take up to a few days because of high traffic.

"Twitter is already used widely for commerce, marketing/promotion, advertising and content distribution," said Hallet. "We believe this new service goes directly to the commercial imperative of brands and corporations, ad buyers, the media, political campaigners, event promoters and local merchants to understand their audiences on this increasingly significant social medium."

"Schmap launched initially with a series of digital city guides in March of 2006. We've raised $4M from individual angel investors," said Mr. Hallett when asked to fill in Schmap's backstory. "We pivoted in 2008, combining our expertise in local with a fast emerging new social platform - Twitter."

As would be expected, Schmap has a large presence on mobile because of their ability to report real-time buzz about a given location. They have mobile versions of their service for iPhone and Nokia, and have recently added features where users can enable Schmap widgets on their website. This allows customers to read aggregated buzz or effectively find their way to business outlets.

Schmap also recently launched a Schmap.me feature, where users can create personalized, easily sharable pages. The suggested applications of this feature include sending links to a given user's Schmap.me page through text messaging, AIM, or to attach it to the end of an email sign-off.