Heinz is getting creative with its ketchup and its marketing.

The consumer-goods giant is turning to Facebook to sell a new signature ketchup, "Ketchup with Balsamic Vinegar." Yummy.

The new campaign puts H. J. Heinz, a global leader in the food industry, in the forefront of social media marketing, an area the food and beverage industry has been slow to embrace.

Starting November 14, Heinz will only sell the 'limited edition" ketchup through its Facebook page, indicating a shift in its marketing practices, or at the very least a willingness to experiment with new practices.

The new limited edition, a blend of tomato ketchup with balsamic vinegar, will be launched on the Heinz Facebook fan page. The company plans to keep the campaign viral, word-of-mouth, counting on its 825,000 plus followers on Facebook to share the news, in effect to market the product for them.

“We’re starting on Facebook first for our most avid fans,” said Noel Geoffroy, the vice president for United States retail brands at H. J. Heinz, via a release.  Geoffroy hopes that the limited edition will appeal enough to its existing consumer base that they will want to add the new product to their already purchased blend, and appeal to the ever-growing "foodie" crowd.

Let's hope for Heinz that the 'limited edition" doesn't go in the way of the green and purple ketchups, which Heinz introduced in 2000 to appeal to children. Parents didn't buy it and it was discontinued in 2003.

This campaign, however, just may succeed. Visiting its Facebook page today, you can already see the buzz around the launch. With fans shouting to each other in anticipation of the new blend to be made available now. They're also sharing with others their love for the brand. 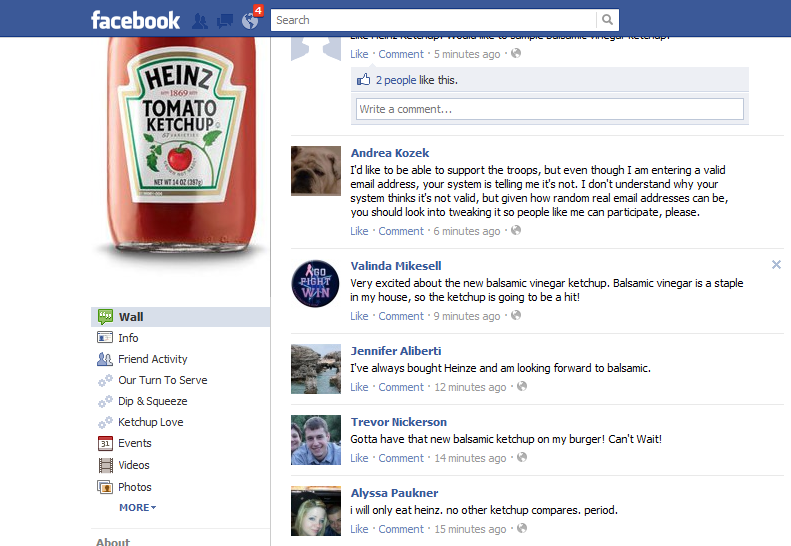 And it has brand loyalty on its side. Remember, the slogan "If it's not Heinz, it's not Ketchup?" For many, it still holds true. The slogan even has its own Facebook page started by a fan.

Henry J. Heinz, the maker of Heinz Ketchup, first introduced the ketchup in Pittsburgh, Pennsylvania in 1876. It is today the dominant brand for condiments, and holds 59% share of the market share, looming over store brands, which account for 21.8%, and Hunt’s, with 15.1%. Impressively, Heinz Ketchup is in in 97% of all American households, beating mustard, which is in 89% of homes, according to Mintel, a consumer research firm.

The new signature blend will retail for $2.49 (plus $2 shipping charge) compared to $1.89 for the traditional ketchup. Balsamic ketchup will be sold exclusively in glass bottles, unlike the original blend, which is now only sold in recycled plastic bottles.  And if you are not a Facebook fan, H. J. Heinz will make it available at your local grocers sometimes late December.