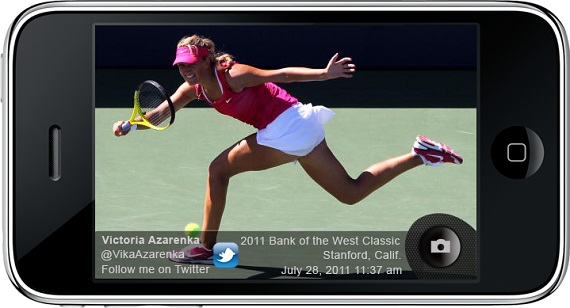 What if you could point your iPhone at a batter at a Major League Baseball game and have that athlete's batting average automatically displayed on your screen? Or what if you saw an emergency in progress, and simply by pointing your smartphone at the emergency, you could notify security where it was happening?

These are two main applications of a new technology created by CrowdOptic, a company behind crowd-powered data collection, which announced a 500,000 funding on Wednesday. CrowdOptic will use the find to further develop their mobile-powered technology for live events and security applications.

Vator News: So what does your product do?

Jon Fisher: Basically our tech enables an enterprise, an event organizer or owner, the ability to understand what a crowd is [visually] focusing on in real time. And we accomplish this by understanding a statistical sample of what the smartphones in the crowd are doing. If you can understand where a crowd is looking, that dramatically affects things like advertising and, per the news today, even security.

So a possible application of this would be to determine where smartphones are being pointed in a stadium and what advertisements should be displayed in those areas?

Yeah, exactly right. When our applications are being used… And don’t so much envision us as being a front-end application… Anytime you download an app, you have to okay a bunch of things, and we’d be one of those permissions. So if we know where the phones are pointed, that really constitutes a new kind of advertising impression.

You know you pay per click on a Google. But here, a model will quickly come about where you could pay-per-view, where we could measure the volume and the intensity of where people are looking. I’m not representing that we’ll have thousands upon thousands of users, but that these will be determined via a statistical sample, via a very small amount of users that will statistically extrapolate what the whole crowd is looking at.

In terms of how a customer is going to interact with your product directly, how should the average mobile user think about this technology? What is going to be cool about this to the gadget-addicted end user?

The coolest thing that we think we’ve come up with is the ability to hold up your phone to a live event, and through our application, be able to have an immediate return on that simple action. You get information coming back to you just by doing that. How do you raise up your phone toward an athlete and automatically have their player stats broadcast to you? Or automatically follow that player on Twitter? That’s the coolest thing I think we offer.

So would you be paid by advertisers directly, or through the event venue?

We’re working with mainly the owners or the producers of the event. They pay us per event or per year, whatever the licensing subscription that we’re working out with them. And by working with the event owner, we can offer them two core services.

One is, by understanding what the audience is focusing on, they can put information right on the phone viewer. For example you’ll see on our home page that there was a recent case study where we were an application in a major tennis tournament, and someone in the stands was able to hold up his phone in the process of taking a picture or video of a tennis player, and through our technology we could put real time information about that player on that person’s phone screen.

For example, Maria Sharapova would be serving, and we were able to broadcast what her second-serve percentage is. So we’re able to dramatically enhance the fan’s experience, by understanding what that fan is looking at.

Another capability that we’re getting ready to announce is to be able to point your smartphone at someone at one of these events and automatically follow that person on Twitter. It’s a pretty powerful addition. There are commerce opportunities. You could hold up a phone and automatically be prompted to buy the hat that a certain tennis player is wearing… It all comes down to knowing where the phone is pointed.

So that’s the advertising and broadcasting service we have. The other core capability we announced on Tuesday…

Imagine you’re sitting in the stands, and you have your phone pointed somewhere, and you could be in the act of taking a picture or a video, or even just holding it to check email or whatever… Now imagine if a fistfight breaks out near you, or plumes of smoke start billowing from somewhere near you. What most people would do at that moment is gawk at the event. And in the process of doing that creates a change in your smartphone’s position.

Now, you just doing that as an individual is meaningless. But if ten other people, or a statistically relevant number of people, do the same thing as you, if they also change the positions of their smartphones and they’re in the same location as you… That statistically brings the confidence intervals up significantly.

So you’re able to determine the significance of an event based on how a crowd responds with their smartphones?

That’s partially correct. It’s not so much the significance. We’re able to determine that something is happening faster than a security guard and faster than a motion-detecting security camera. We can just broadcast that something is happening, and the intensity of it. We don’t know what it is necessarily, but we know that it’s something. If there’s a disturbance or an anomaly, we can help the event owner track it very quickly. And that ties into other systems and there are very well-established security protocols. But understanding the momentum of a crowd that way… It applies to advertising, but it also applies in a very real way to security.

And like you said, the applications of this are user-approved. When you download the app you have to give permission for this data to be collected…

Yes, you give these permissions in almost any app, to allow your location to be tracked. And with our application, if you were to download the ubiquitous app of whatever event we’re affiliated with… And sufficed to say, all of our data would be anonymized. We don’t care about the individual user. We just care about that the user is identified by these attributes that can be broadcast. But we’re not interested in anything personal. Nothing targeted this or that…

It’s anonymous data mixed up in a real-time analytics engine used to determine the focus and the momentum of shifts in crowds.

Can you talk a bit about the technology involved, in layman’s terms?

Sure. So there a thousand companies in the world that operate by tracking your GPS location on a phone. That’s been around for years. Then there are probably a dozen or so companies that also combine a compass setting. So that means that in addition to your location, you know which way the smartphone is facing, and you have a compass indication.

We believe we’re the only company in the world, at least we think so, that does the following two things in addition to those. One, we establish triangulation with other users. So if only two smartphones are enabled with the app, those two users are linked together on a system. And in this way, we can know that not only you’re focusing on something, we can know if you’re following a moving target. So for example, this is how we can know if you’re following an athlete on a field, as you move around the stadium. Two, we have proprietary algorithms that smooth out all this stuff and make more sense of it in the system.

What companies have you partnered with so far?

We have been publically installed at the marquee event of a large sports management firm. This event was the Bank of the West Tennis Conference. But we’ll have more information coming out about that soon. Tuesday, we announced a partnership with one of the largest private security companies in the country. So we’re plugged in to this vertical market in these two ways.

I can also say that we’re proceeding with integration with one of the major search engines. I can’t say which one just yet, but it’s happening right now – for our products to be more widely used and understood.

CrowdOptic is a revolutionary new technology that lets event spectators acquire digital information about live, moving targets by following the action with their camera phones.