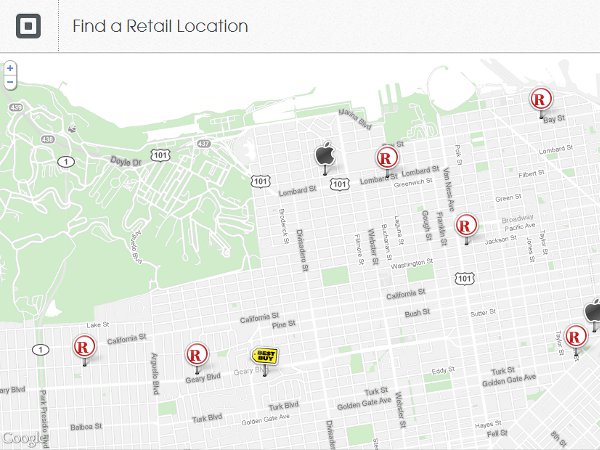 Mobile payments company Square has been making a big push to get its credit card reader on the shelves of several large, big box retail stores, including Best Buy, RadioShack, Target, Apple, and, most recently, Wal-Mart.  Now, for your shopping convenience, Square has added a store locator feature to its site to help you find the nearest store carrying a Square credit card reader.

The new feature is fairly simple to use: you enter your zip code and the site displays a map (courtesy of Google Maps) showing all of the nearby stores that carry the card reader.  The product is available in over 9,000 retail locations in all 50 states, according to Square.

Square’s jump in retail locations is up from just 200 over the summer, with Wal-Mart being the most recent addition.  Wal-mart currently has over 9,600 retail locations in 28 countries.  Square says that while it's currently focused on its U.S. growth, it plans to expand internationally in 2012.

Since launching last October, some 800,000 merchants have activated the Square card reader and the company recently reported that it’s now facilitating more than $2 billion in payments a year.

By contrast, PayPal, which has more than a decade’s head-start on Square, expects its mobile payments volume to exceed $3.5 billion this year, which is five times the volume it did in 2010.

Interestingly, Square isn’t trying to turn a profit by selling its card reader on store shelves.  Rather, it looks like it comes down purely to distribution, since consumers can purchase the card reader for $9.99 in stores and go online to get the amount refunded to their bank account on activation.  Otherwise, merchants can skip the refund process altogether and order the card reader online for free.  In turn, Square makes money by charging 2.75% for each transaction.