This latest round of funding comes on the heels of Waze's $25 million round of funding last December, which was led by Blue Run Ventures, bringing the company's total raised to $67 million.

Waze plans to use the funds to support its seven million-strong user base, and to launch in China.

Waze is 100% powered by users. It encourages drivers to get into their cars and share driving conditions and experiences with other members of the online community. In return, Waze provides real-time information on the circulation and short-cuts, and saves users an average of five minutes per drive, while making suggestions for stops along the way.

I spoke to Michal Habdank-Kolaczkowski, Director of Communications at Waze, about its business model and its plan to generate revenues.

Waze plans to build on its location-guided advertising by working with brands and merchants and location-based apps such as Yelp! and Foursquare to encourage drivers to drive to specific locations. It also selectively licenses its map data, which it fully owns. 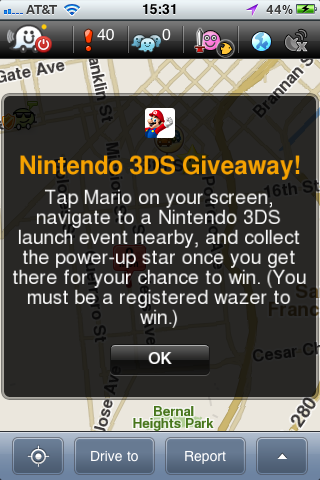 Strong from March's test drive with Nintendo MARIO HITS THE ROAD ON WAZE, Habdank-Kolaczkowski said to me:

"For starters, we have a built-in advertising platform, working closely with merchants; we give incentives to drivers to stop by certain locations. We tested it last March with Nintendo Giveaways project, during the launch of its new 3DS gaming. Waze placed branded pins at over 60 Nintendo sampling events at Best Buy and Toys-R-Us locations across the US. It was a phenomenal success. The conversion rate was nearly 20% of testers to 'navigate', and out of these, 8.11% were confirmed to reach the destination, which was tracked by 'munching' the final road goodie. And as far as our map, we own the map stacks, and we are very selectively choosing to sell it to other services."

Waze plans to remain free for its users.

It began officially in 2006 by Ehud Shabtai, a software engineer from Tel Aviv University, under the name Freemap, and then changed to Linqmap. In 2008, entrepreneurs Uri Levine and Amir Shinar joined Shabtai, and together they founded what is now Waze.