Global brands are playing catch up with the marketing and interactive potential of social media, according to a study out Wednesday morning.

While a majority of global executives agree that social networking and media are key drivers in their market, 84% of these executives admitted that their brand's social abilities and impact are not what they would deem as world class.

More than half of the executives believe sociability is a major contributor in their brand's reputation, up from 45% last year. Those executives came from nearly 1900 global companies with significant sales that participated in the study, which was prepared by Weber Shandwick and Forbes Insigh. Estimates also show that a brand's reputation will credit 65% of that on sociability three years from now -- a 44% increase over four years.

"There is a disconnect between theory and reality when it comes to socializing a brand," said Christ Perry, president of digital communication at Weber Shandwick, in a statement. "All too often, brand managers clamor for the latest and greatest application and new technology, bypassing the need for clear business objectives, a true social orientation and programs that deliver real value to brand communities." 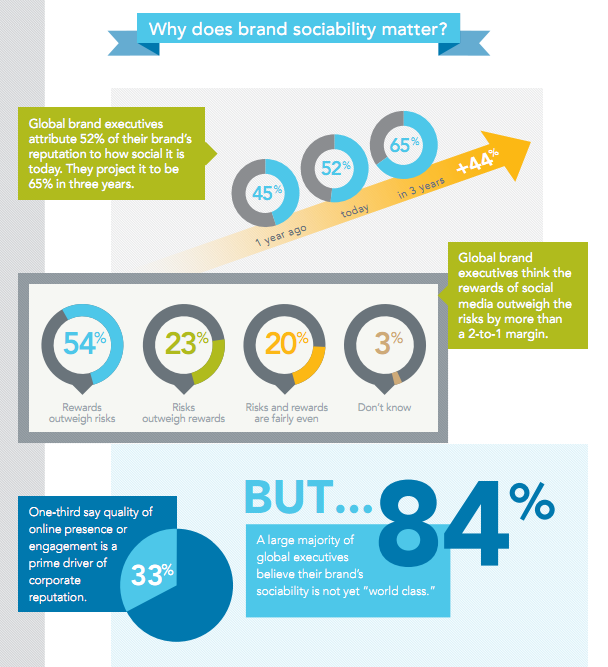 It isn't just about followers

While it is easy to set a goal for the number of followers or "like" that a brand page aims to get in during a time period or product release, what many of these global brands are failing to recognize is that they need to have an internal, cohesive strategy for their social image and impact before any metrics goals are set.

WIth a growing number of social platforms that a brand can have a presence and engage its audience on, companies can find this task confusing, time-consuming and overwhelming but in order to meet the standards set by the online savvy companies that were labelled "world class brands," the global companies need to create some original content to engage their audience.

World class brand were listed as such, for this study, because of their high-level interaction with their audience, creation of original content (rather than using social sites as a place for announcements and news) and collaboration with the audience rather than one-way communication.

While only 28% of global companies created original content for social sites, 45% of world class companies were creating social-site specific material to keep its audience interested.

One Canadian C-level executive in the study noted that "nothing turns off visitors more than old content."

While one criticism of creating a social image, and upping interaction on that front, is the risk of making mistakes and having negative reposes is a real concur, 54% of global companies say that the rewards outweigh the risks -- a 2-to-1 trump over those that think the risks outweigh the rewards.

"While there are inherent risks in socializing a brand, it is no longer an option to go without a social presence," said Leslie Gaines-Ross, chief reputation strategist, Weber Shandwick, in a statement. "Now, more than ever, executives need to harness this opportunity to connect with customers, facilitate a conversation and encourage feedback. Their reputations and livelihood depend on it."

Audi has been one of the leaders in creating a strong social presence that is related but noticeably different from its traditional marketing efforts. Audi has partnered with a social media wonderkin Klout to reach influential people in the field of design and cars. They often run contests and promotions solely on their Facebook or Twitter to test drive or design elements of the car. They also create original content such as desktop graphics that followers can download.

It starts at the top

Such high integration of social interaction demand that the encouragement come from the top-down and should be encouraged across all platforms, but only 30% of global companies say that their CEOs support social media efforts and 29% include a social element in their traditional media marketing of print and broadcast.

The social areas were global companies lost the most ground behind world class brands was in offering brand-related mobile content (such as games and ringtones), participating in check-in applications and having a branded YouTube channel.

Even though global brands saw the importance in mobile and location-based marketing, these are areas that admittedly take more technology and money to implement than blasting out tweets or updating a Facebook page.

"To be a fully socialized brand, leaders need a new blueprint; one that factors in both proper internal structure as well as external programming that help people be informed and identified with brands they engage online," said Chris Perry, president of Digital Communications, Weber Shandwick, in the study. "Organizations need to break down silos, operate strategically and integrate all marketing communications. Only then can a brand successfully and seamlessly engage in a real social dialogue."