Facebook debuts its iPad app after months of leaks and rumors

Now that Facebook's iPad app has been out for 24 hours, what's the feedback?

On iTunes, where the app is available to download free, there have only three user reviews. All relate to the app crashing in iOS5 or not displaying properly.

On the Web, the general concensus seems to be the app is as expected, which isn’t surprising given the amount of time that has passed since the screenshots of the app leaked.

With the announcment of the app, however, there was still no mention of the infamous “Project Spartan,” an HTML5-based mobile app platform Facebook has reportedly been working on which many thought would also debut at the Oct. 4 iPhone 4S launch.

Through the platform, apps would not be distributed through the App Store as a native application, but will be entirely HTML5-based and work in Safari. It was thought Facebook was working on it to give itself maximum control over its apps.

Some 18 months after Apple released the iPad, Facebook announced its official app for the tablet  Monday. The app, or lack thereof, had been puzzling as third-party Facebook iPad apps are among the most downloaded of all time.

Rumors of the debut of the iPad app have been circulating for months after the app gained notoriety in July when it was discovered and leaked that the executable code for the app was hidden within the code for the iPhone app. Many thought that Facebook would launch the iPad app at Apple’s iPhone 4S launch event on Oct. 4.

Facebook was not available to comment on the rumors or why the app had taken so long to launch.

But all this is neither here nor there because we now have full access to the real deal. So let’s take a look!

Starting off, the login screen looks just like the iPhone app. 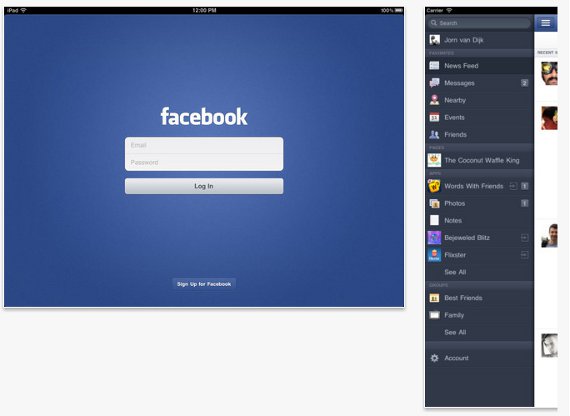 Once logged in, a side menu bar displays on the left side of the screen, while your chat window is on right. 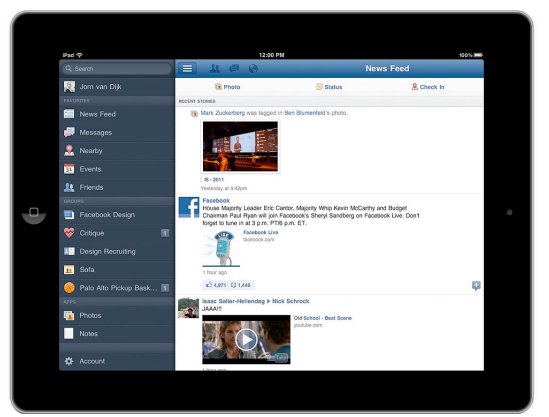 Where the app really shines, however, is the photos section. The app allows you to navigate with tapping, sliding, and pinching, and this allows users to flips through photos quickly, as well as easily increase or decrease photo size. 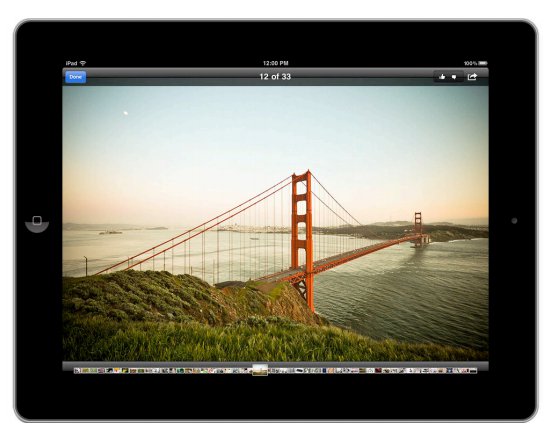 Other cool features are the ability to  access your favorite Facebook apps and games through the app, as well as the ability to share information or send messages without navigating away from your current page. There’s also a “Nearby” feature that shows your friends’ location on a map.

Overall, the app looks good, and as users continue to download it, we'll see if they think it was worth the extremely long wait.