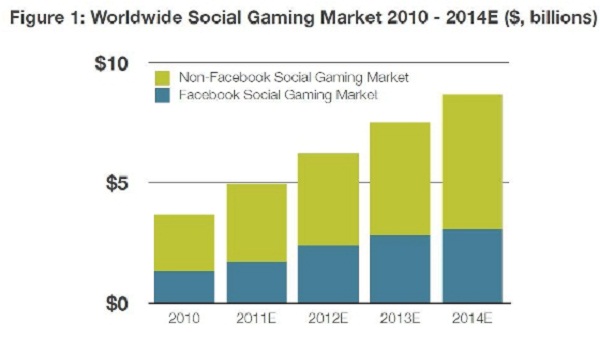 Facebook may dominate our online social lives, and may appear to be the be-all end-all, but it likely won't take the lion's share of the money generated from social games around the world.

Non-Facebook social gaming sites will increasingly dominate the worldwide social gaming industry, growing to $5.6 billion in 2014, up 75% from $3.2 billion, according to a recent study done by SuperData Research on behalf of Viximo.

While the Asian social gaming market is currently recognized as the largest global market, non-Facebook social gaming platforms in the West will account for about one quarter of social gaming revenue in the next three years.

These new projections have non-Facebook social gaming accounting for three quarters of the $8.16 billion global social gaming market. Markets that have emerged as major players on this front include Brazil, Russia, Germany, and Turkey.

Not that it isn't good to be Facebook these days. The social networking behemoth has over 800 million users (and counting), with more than 2 billion posts being liked or commented on per day.

Still, this new study found that Facebook only represents about one-third of global social networking. And beyond North-America, where Facebook clearly dominates the social networking market, the majority of the revenue from social gaming is made on other platforms.

"The social web beyond Facebook is often overlooked when it comes to games and applications. As it turns out, social networks beyond Facebook represent a non-trivial – in fact, significant – and fertile ground for games and apps,” said Viximo CEO, Dale Strang, via a press release.

The company behind these findings, Viximo, is a site that connects game developers with social networking platforms. "We think social games rule! And so we work with smart, talented developers to bring their awesome games to valuable audiences on high quality social networks," according to its About" page claims,

The examples of online social games in Viximo's arsenal including Backyard Monsters and Resort World. These two games have experienced 2.4 and 2.6 million installs respectively, across four different social networking platforms each.

Viximo's gaming developer community touts itself as "the largest platform that connects social app and game developers with numerous social networks across the web." Interestingly, a few weeks previous to the aforementioned study, Viximo released their first game on Facebook, called Snap Me Up.

Viximo currently has over 150 million users with a portfolio including "more than a dozen social networking sites."

Vator News contacted Viximo to comment on their service to gaming developers. "Viximo makes it easy for game developers to bring their games to premium social networks around the world, helping them maximize the impact and distribution of their games and showing them how to successfully diversify, including how to find sites whose audiences will respond to their content," said Sarah Black of Viximo.

"With Viximo, a game developer integrates once with the Viximo platform, and is then ready to deploy to any site in the network."