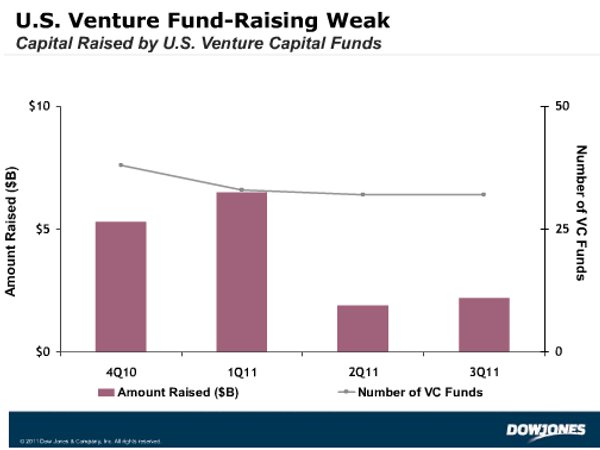 VC fundraising hasn’t recovered since it was cut in half following the 2008 recession, and early-stage start-ups looking for backing may have to get creative because of it.

New statistics from Dow Jones LP Source show that 32 U.S. venture funds raised $2.2 billion during the third quarter, a 24 percent drop from the same period last year when 40 funds raised $2.9 billion. Through the first three quarters of the year, U.S. venture fund-raising was up 9 percent but more than half of the $10.6 billion collected for 90 funds was committed during the first quarter.

“In the first quarter, a small number of large closing from funds like Sequoia Capital, Bessemer Venture Partners and other firms played a significant role in lifting the amount of capital raised,” Dow Jones spokeswoman Kim Gagliardi said to VatorNews this morning.

The private equity funds that have raised the most capital in 2011 in the U.S. and Europe are BC Partners Ltd.; Equity Partners; Berkshire Partners LLC; GTCR Golder Rauner LLC; and AXA Private Equity. BC Partners has raised the most with $7.69 million raised to date. The fund is still open.

In particular in 2011, early-stage funds took a huge hit, while multi-stage continued to do well and late-stage funds tripled the amount raised at the same time last year.

Ten late-stage funds raised $3.5 billion during the first three quarters, more than triple the $1.1 billion raised for 8 funds a year ago.

“As limited partners continue to show a strong preference for investing with only the most prominent firms, the number of funds and the amount of capital committed have shrunk,” said Scott Austin, editor of Dow Jones VentureWire, in the release.

What this may mean for early-stage start-ups is heavier competition for VC funding.

“If this trend continues, entrepreneurs will face greater competition for capital and other investors, such as angels and corporations, may find opportunities to invest in deals that, traditionally, would have been done by venture firms,” Austin said.

In Europe, venture capital fund-raising is on pace to set another record low as 25 funds garnered $1.8 billion during the first three quarters, a 31 percent drop in capital committed from the same period in 2010. In the third quarter, four funds raised $424 million.

After closing $125 million for three early-stage funds during the third quarter, the total raised for European venture funds during the first nine months was $1.2 billion for 18 funds, a 14 percent decline in capital committed compared to the same period a year ago. Multi-stage funds fared worse as seven funds raised $585 million in the first three quarters, a 47 percent drop in capital committed over the same period last year.