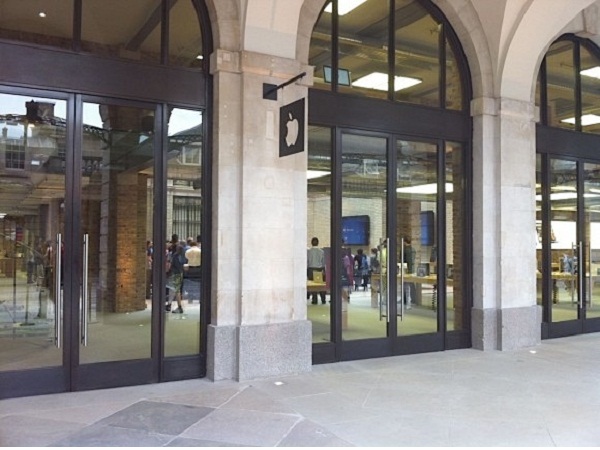 Some Londoners took their fandom of Apple products to new heights this morning, when they drove their mopeds into a Covent Garden Apple Store and began looting the place.

According to a police report, the thieves droves seven mopeds into the Apple Store, "most if not all with a...passenger," and made off with iPads, Macs, and "other similar devices." All the thieves were wearing "full face crash helmets."

Two arrests have been made. Police are reporting that two males, a 16-year-old and a 21-year-old, were arrested at the scene. "Although two men are in custody on suspicion of burglary, the inquiry continues and other persons are sought," said police. A discarded moped was also found on the scene.

Interestingly, one of the first witnesses to the crime was a semi-famous blogger who was camped outside the Apple Store. Robert Shoesmith writes a blog from his encampment outside the London Apple Store, chronicling his wait for the new iPhone 5 to come out.

Shoesmith was only a few feet away from the crime in progress. Of course, Shoesmith blogged abaout the incident, saying he was annoyed by the commotion "as [he] was having an early sleep and was out for the count." The crime took place at 1:15 A.M., London time. Pictures taken after the crime show a boarded up Apple Store window.

Maybe police could be helped by one unauthorized iPhone app which recently caught an "Apple thief" in New York. In this case, a woman's iPhone was stolen but she had recently uploaded an app called iGotYa, which takes a photo whenever a security code is incorrectly entered and then emails the owner. The app is only for "jailbroken" phones, being a non-Apple app. How ironic...

The downside of rampant popularity of any product is that it becomes prime real estate for would-be thieves. Apple, being one of the most popular gadget companies ever, makes your beloved iPhone a big target for snatchers.  In Brooklyn, NY, some 20 iPhones were reported stolen in the last month alone, and in Bedford, CT, thieves stole several iPhones and Android phones from a Go Wireless store late Friday night.

Zealotry for Apple products is par for the course. But given these thieves' moped-riding intensity... Could this be the nerdiest crime ever?