Bad news for people tired of seeing video ads on their mobile devices... 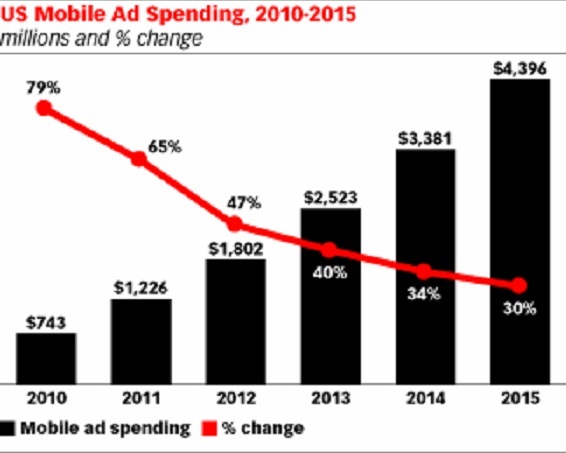 Think you see too many ads while browsing the Internet on your mobile device? Well, you should probably get used to it, because such ads will only increase as the world continues to go mobile...

Mobile advertising dollars are on track to top $1 billion this year in America, as smart phones and mobile Internet become ever more common in the lives of average tech users. Projections have mobile advertising reaching $1.23 billion, up from $743 million last year. Additionally, these same trends put mobile advertising at $4.4 by the year 2015.

These projections are on an uptick from forecasts calculated in September 2010, which put mobile advertising spending for 2011 and 2014 at $1.1 billion and $2.5 billion, respectively.

As of yet, messaging-based ads still account for the greatest percentage of ad spending in the mobile world, at $442.6 million. But that proportion may change as mobile Internet and smart phone usage continues to experience ever-increasing numbers. Projections place dollars for search-based ads and banner/rich media ads (both highly associated with mobile Internet use and smart phone tech) ahead of messaging ads.

Projected figures place banners/rich media and search-based ads evenly at 33% of total dollars, each rounding out at $594.8 million. At this rate, each would individually surpass messaging ads, projected at only 28.2% of total advertising spending.