Another social network bites the dust.

Digital media company Specific Media announced Wednesday that it has acquired Myspace from News Corporation. Although terms of the deal remain undisclosed, sources say the site sold for $35 million.

News Corp., which retains a minority equity stake in the company, was hoping to get between $50 and $200 million in the sale. When Rupert Murdoch’s Corp. originally bought Myspace back in July 2005, it had paid $580 million. (I guess that’s not so bad: AOL originally paid $850 million for social network Bebo, only to resell it for less than $10 million.)

Myspace, like a plane in a death spiral, has been on its way out for a few years now. But the situation grew worse recently. In the year after February 2010, traffic dropped 44 percent to 37.7 million unique U.S. visitors, according to comScore. As the users fled, so did advertisers: revenue from advertising, eMarketer predicted, would decline from $288 million in 2010 to $184 million in 2011.

Though the site was once king of social networking, archenemy Facebook eventually edged it out by first stealing young users (starting with college) and then attracting older users.

Once it was clear to the site’s owners that it stood little chance at reclaiming its cool as “a place for friends,” it tried doing what any self-respecting technology company would: a pivot.

With much fanfare, the site marched into the fall of 2010 with a comprehensive site rebranding and redesign, complete with a logo that was too easy to hate. (After all, they basically killed off their last remaining strength--the brand “Myspace”--by deleting turning the “space” into a literal space.)

In spite of the silly logo design, however, the site actually seemed like it stood a chance at surviving once it shifted its focus from being a social network to being an entertainment hub. Most users were already using Myspace largely to look up musician pages, for example, so it finally felt like the company was bulking up its best parts.

Well, the last chance rebrand and redesign failed to have a large effect, as evidenced by the company’s slashing of 500 jobs in January.

Today, a major chapter in Myspace’s history comes to a close. The company will be downsized further, says CEO Mike Jones, and he will be leaving his position.

As for insight into the future of the Myspace Web property, all we have is this:

“Myspace is a recognized leader that has pioneered the social media space. The company has transformed the ways in which audiences discover, consume and engage with content online,” said Tim Vanderhook, Specific Media CEO. “There are many synergies between our companies as we are both focused on enhancing digital media experiences by fueling connections with relevance and interest. We look forward to combining our platforms to drive the next generation of digital innovation.”

Let this be a lesson to you, Facebook: you are not invincible. 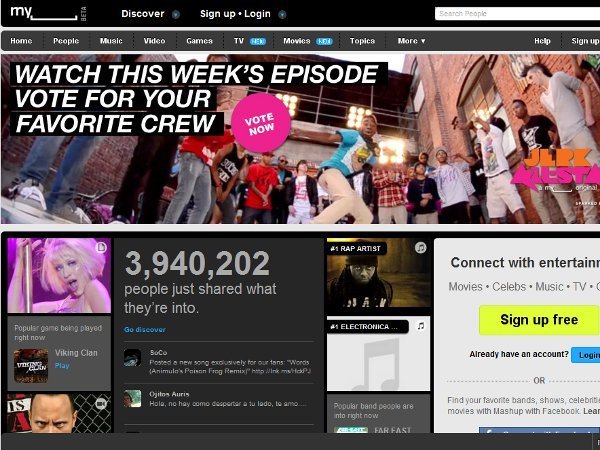