Valued at over a billion dollars by Andreessen and DST: person-to-person travel accommodations site? 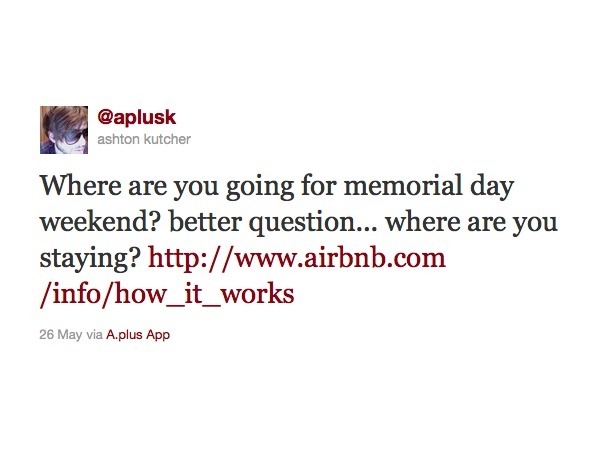 Airbnb, which enables people to provide accommodations to travelers, is currently closing a funding round of at least $100 million at a $1 billion valuation, or greater, according to sources. The new boost of capital is coming largely from round leader Andreessen Horowitz and a serial mega-round participant Digital Sky Technologies (DST).

We reached out to the company about the reports, but a spokesperson said they were only rumors.

Andreessen added another $200 million to its coffers less than two months ago, specifically for larger, growth-stage rounds, and DST has always been obsessed with pumping popular startups with a ton of money, so both are believable candidates for Airbnb’s latest backers.

Just last November, Airbnb raised less than a tenth of this new round in a $7.2 million Series A from Greg McAdoo of Sequoia Capital and Reid Hoffman of Greylock Partners. The Y Combinator startup also announced last week that Hollywood-gone-Valley icon Ashton Kutcher has made a “significant investment” in the company and will be joining as a strategic advisor.

“It’s moving social trust into commerce,” Kutcher said of Airbnb. “Your home is a very private place, so building trust around turning that into a consumer offering is unlike any other site.”

Kutcher really knows what he’s talking about, too. Airbnb is really unlike any other site.

The company has created a service by which roomers and their hosts can get connected over the Web in a easy and trustworthy way. Roomers find a flexible, homey place to stay on the cheap, while hosts make a little extra cash from their empty rooms. On top of that, Airbnb could prove to be even more rewarding to a wider audience because it comes in handy from so many angles. For example, carefree travelers might use the site not just to save money but also to find new friends (à la couchsurfing.com).

It’s a great situation for everybody involved, except for hotels, who are bound to suffer more and more from the growing popularity of Airbnb. Last year, the site grew an astounding 800 percent and to date has booked 1.6 million nights.