I recently got a chance to chat with Lightbank’s newest addition, Paul Lee, who joins the investment firm as its first outside Partner. I learned a couple of interesting things about him. Number one: he likes when entrepreneurs email him at 6:30 on a Saturday morning, (note: don’t call him at 6:30 on a Saturday morning) and he thinks that Groupon’s swarm of clone followers should be looked at in a more positive light.

Lee, a former Managing Director and Group Head of digital ventures for Playboy Enterprises, as well as a former SVP for NBC’s Peacock Equity Fund, joins Lightbank’s founding members Eric Lefkofsky and Bradley Keywell, who are both renowned for their enviable portfolio, which includes an early investment in Groupon. Prior to joining Lightbank, Lee served on the board of directors for several companies, including 4INFO, Greystripe (which was just sold to ValueClick for $75 million), and Ramp.

So what is his investment philosophy? It's pretty cut and dry: Passion. He looks for entrepreneurs who demonstrate passion for what they're doing.

“The focus for me is twofold: First, it’s all about the entrepreneur and management team. They have to have integrity and passion. Passion is the first and most important aspect. Second, I like to invest in large spaces, whether antiquated or advanced. The larger the market, the better.”

Now I have to question the passion thing—because just about any CEO you talk to is “passionate” about his or her product or service. If anything, it’s impossible to find an entrepreneur who isn’t obnoxiously in love with his own idea. Lee clarified that “passionate” entrepreneurs are people like Mark Pincus, Andrew Mason, Mark Zuckerberg, and Jack Dorsey—people who are passionate about what they’re pursuing and surround themselves with smart people.

“Look at Square. Jack Dorsey didn’t know anything about payments, but he surrounded himself with great people,” said Lee. So how does an entrepreneur manifest “passion” to Lee?

“I like it when an entrepreneur emails me at 6:30 on a Saturday morning.”

Fair enough. But what of the large, antiquated markets? First of all—what does he mean by antiquated? Lee used the example of loyalty programs. You go into a sandwich shop and you give the cashier your loyalty card, which he stamps, and after ten or so stamps, you get a free sandwich. It’s a pretty well-worn idea, but that’s a huge multi-billion dollar industry. The problem is that it’s highly fragmented. Lightbank is looking at new technologies that can disrupt those types of industries.

But what about “large” markets? Doesn’t that necessarily equate to crowdedness? Yes, said Lee, but it forces you to look closer at the entrepreneur to find out what’s unique about that person that will give him or her an advantage over competitors.

Which brings us to Groupon, Lightbank’s baby, so to speak. While certainly not an antiquated space, group buying has definitely become a crowded space. Does that concern the fine folks at Lightbank  that maybe Groupon's model is just too replicable?

“Any space with a lot of clones—it shows the model works,” said Lee. “What differentiates a top-tier player from a me-two, me-three operation is speed of execution and constant innovation.” Well said. 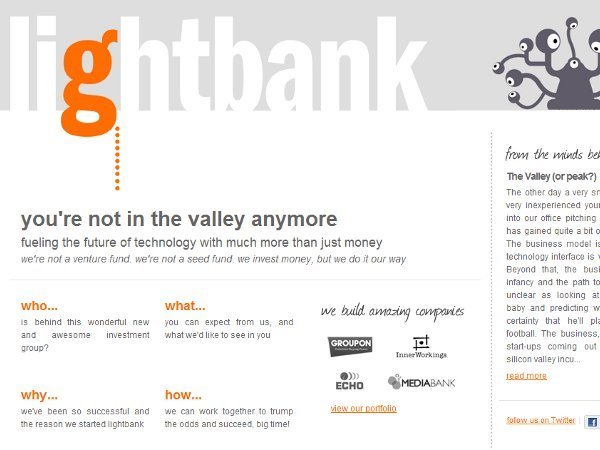