Groupon, LivingSocial and all the rest better look out. A new deals site just launched, and it already has over 600 million users.

As has been anticipated for at least a month, Facebook Deals are now live. And, as was previously announced, they’re first launching in Atlanta, Austin, Dallas, San Diego and San Francisco.

While check-in deals on Facebook Places have been around since the fall, this is the first time users can get Groupon-like deals delivered right from their favorite social network. The deals can be emailed to users, but they’ll also be displayed right in the News Feed.

Right from the beginning, however, Facebook is throwing around its social weight to differentiate itself from the armada of daily deals clones.

“While many Deals on Facebook offer discounts, it's more important to us that you find interesting experiences around you to do with friends,” says Emily White, director of local at Facebook, in the announcement. “We've worked with partners and local businesses to help deliver the best social activities in your area.  And once you've found a deal you like, having the deal on Facebook makes it easy to share, buy and plan with your friends.”

To illustrate White’s point, here’s a screenshot of the Deals page for San Francisco:

Deals in the first two rows, under “Food” and “Events” categories, look like any other offers you might find on a site like Groupon. You save as much as 50 percent on burger or rafting outings--nothing special there. In the third row, however, you’ll see deals based on things that your friends have Liked.

The potential strength of this system runs deep. I should already know what my brother Billy might want for his birthday, but just in case I’m stumped, I can literally look through Facebook Deals for some advice. Boom. San Jose Earthquakes tickets, marked down to $50 from $75. E-commerce has never been so relevant because no website in the world knows as much about us as does Facebook. It’s truly a game-changer.

Here’s a look at what a Deal page looks like:

Maybe the description isn’t as clever or funny as a Groupon ad, but it gets the job done. Additionally, while it’s not an option yet, reports say Facebook will eventually let users pay for deals with Credits, which have heretofore been reserved for use in applications and games.

Of course, the viral machine is already out in full force, recruiting as many people as possible to try out the new deals. Users near the Deals launch cities are seeing a little notification at the top of the News Feed when they first login:

And, on top of that, there’s the story actually within the News Feed, showing which friends have signed up for Deals:

aDealio and viagogo have been added to the list of vendors whose deals will also be included on Facebook. These include: Gilt City, Home Run, OpenTable, Pop Sugar City, Tippr, KGB Deals, Plum District, ReachLocal and Zozi. 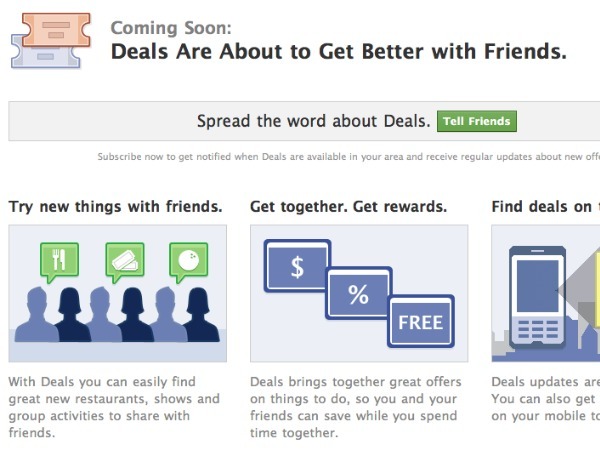 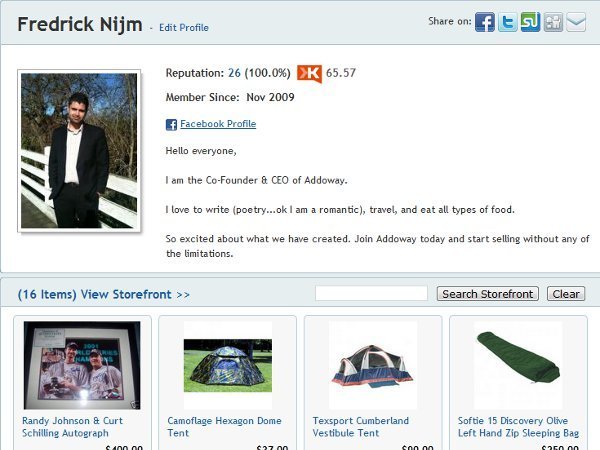