Get real-time info on objects in motion using CrowdOptic

Exclusive: CrowdOptic, a mobile app that that allows smartphone owners to tag, track, and get information on a moving object using only their phone, has raised $1 million in a Series A round led by co-founder and CEO Jon Fisher, with help from several angel investors and an institution that is also a customer. Additionally, the company also announced Tuesday that it has partnered with Moon Express, a commercial lunar transportation service, to track and provide real-time information on the launch of the lunar lander Airship Eureka.

This, my friends, is the digital era, and nothing else quite epitomizes that the way CrowdOptic does. The company, which originally launched as an event-based photo-sharing service (along with dozens of other photo-sharing startups), but has since taken a different track. Now, CrowdOptic is offering a whole new service: information on objects in motion.

Say, for instance, you’re at a baseball game and you want to find out what a player’s batting average is. Simply point your photo-enabled phone at the player and CrowdOptic’s proprietary technology delivers completely automated information in real-time in the form of little caption boxes. Users can then snap a picture and share it with friends, complete with the text box.

Several major tech companies like Cisco, IBM, and SAP are working on similar mobile apps for live events, but the technology is limited because “the fortune 500 apps, like everyone else, are based on location that can't find MOVING objects,” Jon Fisher told me. “No technology can affect the pictures of these moving objects until now.”

CrowdOptic tags and tracks moving objects in real-time using only the native smartphone environment—meaning the technology involves no software downloads, nor must it be integrated with the organization hosting the event. Simply put: you open the app, point your phone, and get real-time information on different features of the event you’re attending. The most amazing part is the fact that the information isn’t provided by the event organizer—there’s no guy locked away in a tower typing all of the little factoids up and sending them to your phone. The text is fully automated and delivered by CrowdOptic using the company’s own technology.

This naturally presents a unique opportunity for advertisers, who can use the app's technology to deliver strategically placed ads on a moving object.

Moon Express is the latest company to get in on the action. The privately funded commercial lunar transportation and data service company is using the app to allow spectators to tag, track, and get up-to-the-minute real-time updates and information on the Airship Eureka as it ascends. Additionally, users will be able to get updates and photos of the Airship Eureka as it breaks new launch milestones.

The app is currently only available to CrowdOptic’s enterprise partners who may then deploy the app in beta to their own customers for events in a specific location, but Fisher said that the app will soon be available in the App Store for the iPhone.

The funding brings the company's valuation to $7 million, and Fisher said that the new capital will be used to grow the business and roll out deals in the pro sports and premier events spaces in the near future. 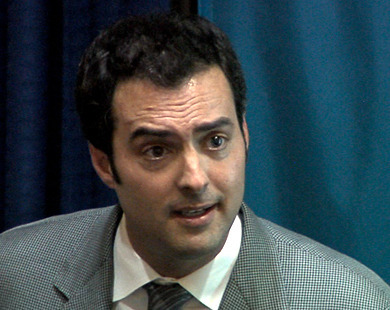 Planning for an acquisition from Day One